Steep Review – Riding the highs and lows of a risk taker

Steep is a bit like being taught how to ski by an imbecile masquerading as a qualified instructor. Someone like your mate Dave, who has seen snow once in 28 years, but instils a false sense of sensible education. You’ll be fascinated by the beauty, and grow to crave the thrill; but eventually the spiral of incompetence will threaten to kill you, so you’ll throw down your hired polls in frustration and return to the solace of the bar, a more natural environment, and vow never to return.

Ubisoft bills Steep as an open world extreme sports adventure, gifting you the keys to explore the Alps when and how you please. In a general sense, that’s what it delivers, but perhaps not how it intended to do so. Drawing immediate comparisons to the forgotten snowboarding heroes of generations gone by, Steep definitely isn’t trying to emulate them.

In fact, it almost fails at being a traditional snowboard trick-fest, because that’s its greatest weakness. Rather, it’s the variety of action sports – wingsuit flying, snowboarding, skiing and paragliding – that makes it an interesting concept; and that’s what Steep is. It’s the opening chapter in an experimental approach to a social, open world sport game that doesn’t quite feel complete. 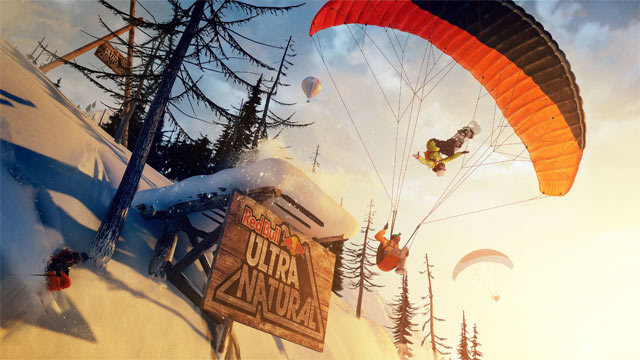 Steep, whether it intended to be or not, is a mountain exploration game. The deeply ingrained multiplayer functionality might as well have offered an option to play I Spy, but you’d be hard pressed to find something that doesn’t begin with the letter ‘S’. It’s a pretty world, at its peak majestic to behold, blending the snow, sun and sky into picturesque landscapes that are at times relaxing to explore; when you’re not desperately fighting for control, hurling towards treacherous obstacles at breakneck speed.

While exploring the stunning liberal recreations of Mont Blanc, Monte Rose, Matterhorn, Pointe Percée and Aiguilles appears intrinsic at the outset, it’s only a small fraction of what you’ll actually do. Most of your time is spent finding a new event on the clunky 3D map, completing it for XP, and doing it all over again until there’s nothing left to try.

The Mountain View map is good in theory, but suffers from the common Ubisoft cluttered syndrome. It’s hard to see where to go next with so many icons — and no legend or filter —  while the extra dimension just makes it more difficult to select the event you want, once spotted. 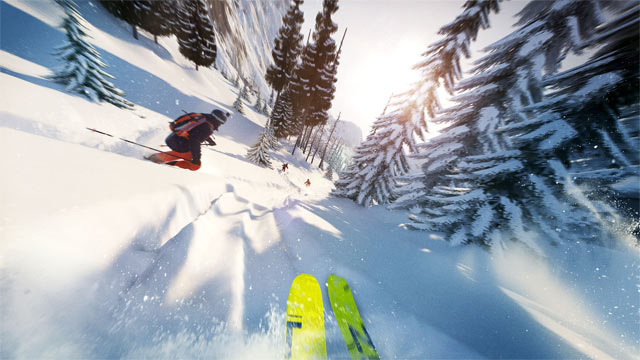 The events span the four disciplines and are either skill-based – earn points by completing tricks and narrowly avoiding nasty confrontations with trees and rocks – or races against the clock. For the first few hours, I really enjoyed this. The blend between snowboard and wingsuit was enough variety, and while I absolutely suck at paragliding and cannot earn above bronze medals in any events, it’s useful in carving out your own exploration phases.

There is some merit to wandering off from the fast travel system, as new areas must be viewed through binoculars, quite closely might I add, before they spawn as an accessible location. As paragliding and cumbersome jogging are the only means of ascending uncharted territory, the slow plodding of paragliding has a place amongst the exhilaration of the more extreme sports, but isn’t very fun in a race.

The adrenaline rush of near-miss wingsuiting is where Steep builds upon its potential. It’s a thrill to plummet within inches of death – although nobody can die in Steep, the worst case scenario is being knocked out – cascading across the ridges of a rocky mountain, as perilously close to the ground as you dare. 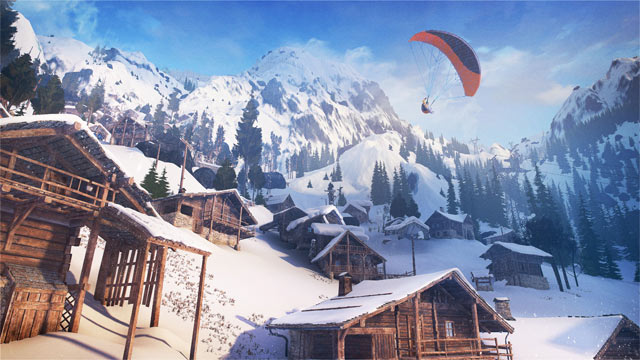 The default camera angle is a third-person view behind the invincible athlete; Steep also enables a licensed GoPro first-person view that I suspect will become a favourite amongst veteran players – although, the shaky-cam implementation is too disorientating for me.

As there are no tricks to muster as a flying squirrel, wingsuit challenges are the clear highlight amongst the four sports. Skill points are earned by flying as close to the ground as possible, without crashing; while timed races implement tight checkpoints to ensure it’s only just possible to beat the target time for a prestigious gold medal. If I could, wingsuiting would be the only sport I’d play in Steep.

However, it’s not that type of game. The four sports, and walking, can be substituted instantaneously, but most events are limited to a specific type. Snowboarding and skiing are interchangeable, and make up about half the content, with wingsuit and paragliding rounding out the package. If you don’t like one or more of the sports, tough luck, there’s only so long those events can be avoided, if you want to level up and unlock more content.

During the opening hours, I really enjoyed snowboarding; but with merely a basic handle on gameplay, I was lulled into a false sense of my own ability.  With time, new tricks and more challenging demands, I came to realise it isn’t me that is bad; it is Steep’s terrible tricks system.

In trying to be super intuitive, Steep’s unresponsive tricks scheme is a baffling enigma. After hours of incessant cursing, I discovered the jump command has to be given much sooner than feels natural, and spins, flips and a myriad of other mid-air stunts are waggle and hope. Pulling off 1080 spins and front-flips seems simple enough, when all commands are given with the left stick mid-air, but it’s horribly inconsistent. Just when you think you’ve mastered one type of trick, it stops working, because you never really understood the erratic timing.

Unfortunately, completing a hard trick-based challenge is entirely dependent on luck. The brief tutorial never properly explains how to land. The best practice seems to be releasing all buttons long before hitting the ground, and then landing is automated. That seems backwards: it should be much easier to execute a jump or trick, and precise timing should come into play for the crucial landing. 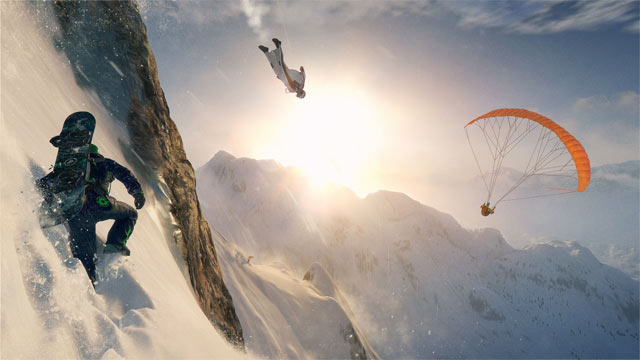 Combine the irritable trick system with a confused physics engine, and real world snowboarders are going to be left frustrated. Even once you’ve learnt to compensate for Steep’s odd jump timing, it’s a solution that only works from artificial jumps. Predetermined routes want you to jump off the natural terrain, we see the ghosts doing it, but the physics engine isn’t stable enough. You often won’t get enough height to perform anything meaningful, despite amassing more than enough speed. I can’t understand the logic behind combining an admirably realistic recreation of the Alps with the physics of Diddy Kong Racing.

It’s a shame because the speed challenges, both on board and in wingsuit, aren’t affected by the confusing physics; in fact, the arcade style works well when plummeting towards the pristine snowfields. It’s only tricks that fail spectacularly, and that’s an inherent flaw in a game designed around a loop of try-fail-try again.

Steep demands and expects repeated failure, and implements an immediate restart feature to accommodate the learning process. I accept that when the inevitable error is entirely my own, but when it’s a result of physics and a control scheme that don’t communicate properly, rage quitting rises to the forefront.

It’s a game of repetition, about trying to improve your efforts, and that’s deeply satisfying when it’s all within your control. Unfortunately that’s only really the case for wingsuit events, and time-based challenges on a board or skis. 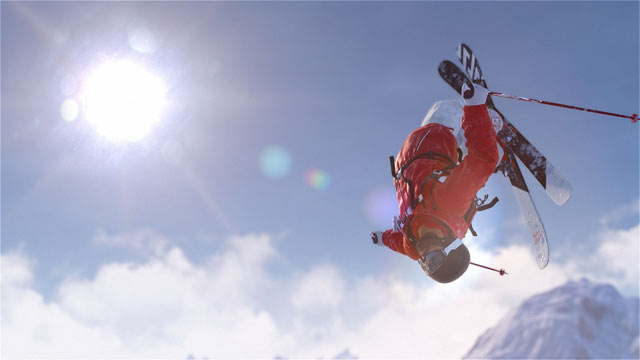 Improving upon your own times brings internal gratification, but decimating those of your friends is where Steep becomes the integrated social experience Ubisoft Annecy promised. The seamless multiplayer populates the world with other players attempting the same events, or free roaming, and features the easiest squad system I’ve ever encountered. If you see someone in your world, linking up is one button a way, but that doesn’t force you into a rushed marriage. Players in a group can still go their own way, and there’s no messy divorce when you’re bored with XoAnil8uBruZoX following you like a lovesick puppy.

Drop in and out multiplayer with random snow dwellers injects an element of comradery into one of the most isolated places on Earth, but it’s challenging real mates that strives you to improve. The ghost system, as you would expect, is a flurry of wingsuit gliders and snowboarders who have completed courses just a little faster. They show the suggested lines of the gold, silver and bronze medal runs to try and imitate – but that’s not necessarily how to beat them.

Despite the persistent online world, Steep’s social life isn’t about playing together. It’s about sharing your challenges with friends, and spending hours in an edit suite making yourself look good on YouTube – this doesn’t really interest me, but there’s no denying it’s a content creator’s dream, especially for the majority of us who could never attempt this in real life.

There’s so much that I like about Steep, but the more time I spend with it, the more it becomes irrefutably frustrating. The wingsuit events are thrilling, and well crafted, as is the entire open world, which stunningly recreates the Alps. The multiplayer features are always in your face, but rarely overwhelming, and the chaotic routes of snowboard and ski events are exhilarating, featuring an appropriate quota of horrifying crashes. Unfortunately the unresponsive trick system, coupled with physics that doesn’t allow it to work properly, holds it back from being the grand return of the extreme snowboarding genre. Too many snowboard and ski events are based entirely on completing unpredictable tricks, plus paragliding isn’t very fun, and these can’t be avoided for long. There’s enjoyment to be had here, especially wingsuiting, but if all you care about is nailing tricks, SSX is backwards compatible on Xbox One for a fraction of the price.

Next →
Sea Of Thieves alpha: Sign up to be part of the shenanigans
Click here to cancel reply.

Snow Boarding games were perfected 15 years ago upon the release of SSX tricky.  I don't understand why developers strive for this interconnected online experience, when it always comes down to how good the gameplay is.

Just give me a 4K HDR version of SSX Tricky.

Yes! Even the more recent SSX game was the bomb. It's on Xbox One BC btw.