In No Man’s Sky, your ship is your companion: without it, you can’t explore, travel, or do anything that defines the experience. Your value to the universe (and its value to you) is determined by your capacity to purchase and upgrade ships, so you can “star hop” and, hopefully, find your way to the centre of the galaxy.

Importantly, your ship is used to travel from planet to planet to gather resources, which help you craft upgrades. Some upgrade require units, while others can simply be crafted by using materials you find on planets.

In this guide, we’ll show you the different types of ships available to you, how to upgrade them, and some tips to ensure you quickly build your ship up into the ultimate star traveller!

You’ll want to also check out our other guides to ensure you’re well prepared before heading out into the galaxy. Everything from adding inventory slots and upgrading your exosuit, to earning units and making money quickly, and, importantly, how to find and craft antimatter.

Check out our guides below.

There are three types of ship class in No Man’s Sky. Unfortunately, you’ll only be able to own and use one ship at a time, so it’s important to have a clear objective and goal, which will allow you to choose the right ship based on how you want to play.

How To Buy A Ship

Ships are fairly common in the universe, so you shouldn’t have any issue finding one that suits your needs. Seeing as though they are procedurally generated (like everything else in the game), you will never find the same ship twice.

You can purchase a ship from a number of locations:

You can simply offer to purchase a ship if you find one you desire. If you see one you like, buy it immediately: don’t risk losing it, because ships come and go and you may never find one like it again.

Crashed ships are interesting because more often than not, if you find one it’ll be better than the ship you’re currently using. The catch of course is that there is something wrong with it, so you’ll need to repair it. The other downside is that you’ll lose your current ship, all of its upgrades and fuel, so while the crashed exploration ship you find might be better overall than your current fighter ship, it might not be worthwhile considering your style and gameplay plans. In my experience, however, it’s almost always been worth the upgrade and units to repair the crashed ship.

Components are like the organs of your ship. If you leave them, they’ll eventually rot and you won’t get very far with them. Work them out and improve them, however, and you can build a beast of a ship.

These components can be upgraded, meaning you can change out your ship’s drive, instruments, ammo, weapons and fuel capacity. Importantly, the upgrades available will depend entirely on the type of ship you’re currently using.

In order to upgrade components, you need to collect resources, and use said resources to craft the necessary technology.

How To Upgrade A Ship’s Component

Upgrading a ship’s components is fairy simply: just open the ship’s inventory. There are four technology upgrade categories (which also apply to your exosuit):

You’ll be able to buy and sell goods at the countless space stations you’ll find scattered throughout the universe. Prices will vary depending on where you are and the rarity of the product itself: the closer to the centre you are, the more expensive things tend to be.

Upgrade your ship relative to its use: for an exploration ship, focus on upgrading the hyperdrive and purchasing plenty of fuel. You’ll also want upgrades for speed and manoeuvrability. Cargo ships need more slots to hold cargo (obviously), while Fighter ships need to be able to take on and run away from pirates, so focus on weapons and manoeuvrability.

IMPORTANT: Don’t die. Once you die, you lose your ship for good, and all that hard work you put into upgrading it will be for nothing. Only enter into a fight you are absolutely certain you can win, and if you’re outnumbered, don’t be afraid to run away. Sometimes it’s best.

Your ship has a centre screen that is used for navigation. There are other panels that display speed, shield details, distance, as well as other important details of your travels.

This is your ship’s HUD, showing weather conditions and the planet’s name.

Your weapons will change and vary depending on the type of ship. Fighter ships tend to have more advanced weaponry, while trading ships will have heavy weaponry to fight off pirates and compensate for lack of speed.

You need to pay attention to your fuel gauge. You can run out of fuel during a jump, which can leave you stranded in the middle of space. You can refuel your ship by mining necessary resources, particularly from asteroids.

Ammo is also a finite resource, so be sure to mine and purchase ammo so that you’re always ready for a battle.

Your ship’s defensive mechanisms (generally the shield and deflector) need fuel, so that makes it that little bit more important to keep an eye on the fuel gauge. Only use your shield when you’re under attack so as to preserve fuel.

Buying Fuel and Upgrading Your Hyperdrive

Being the most fuel-intensive aspect of ship travel, it’s important to ensure your hyperdrive has the necessary resources to actually be of use to you. Fuel elements are indicated as red on the periodic table, so keep an eye out for them. You can mine Thamium9 on asteroids and buy it from space stations: it is a fantastic way to quickly refuel your ship.

Got any tips for ship customization and upgrades in No Man’s Sky? Sound off in the comments below! 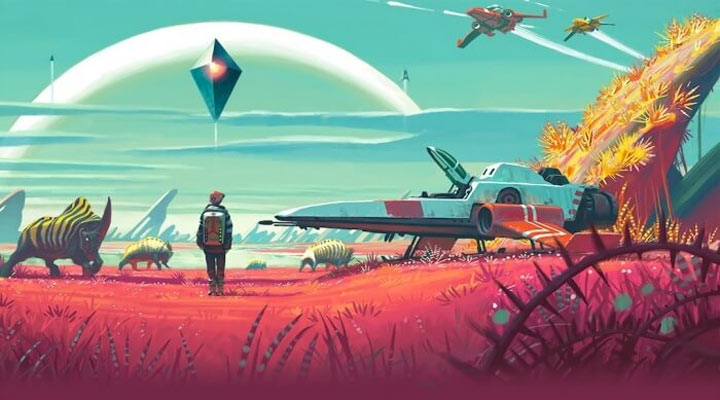 ← Previous
No Man's Sky guide: How to add inventory slots and upgrade your exosuit

Next →
No Man's Sky Atlas Pass guide: How to find and craft the blueprint
Click here to cancel reply.

you don't lose your ship if you die... some of the upgrades break, but you don't lose it. you cant turn shields on or off and they dont use fuel when not being damaged. Ammo isn't finite on all weapons. missing shuttle and exotic ship types. It's like the author never played the game.

Article was written a year ago. I'm sure a lot has changed.