Call of Duty: Vanguard‘s unveiling overnight has been generating plenty of buzz, and as is the case with every new Call of Duty much of the chatter centres around just how much of a burden the game is going to be on console storage, and what its download size will be.

It’s set to hit Xbox Series X and Xbox Series S on November 5, and will unsurprisingly come with a hefty storage space requirement, so best you start considering which games you’re going to cull ahead of the game’s release.

Twitter was abuzz with claims Call of Duty: Vanguard would require a staggering 270.05GB of storage space, as was detailed on the game’s listing page on the official Microsoft Store. Thankfully, it turns out the base game download size is much smaller than that.

As revealed by The Verge’s Tom Warren, Call of Duty: Vanguard‘s approximate download size of 270GB on the store caused many an eyebrow to rise.

However as Tom later discovered, that doesn’t tell the full story. Individually, the base game clocks in at around 75GB on Xbox One, and 95GB on Xbox Series X and Series S.

The initial 270GB listing is actually what’s included in the cross-gen bundle, combining the download size of both the Xbox One and Xbox Series X versions of the game. Big phew there!

There were murmurs earlier in the week that Call of Duty: Vanguard would be set in a post-WW2 world, with an alternate reality to follow the allies as they continue hunting down Nazis across the planet.

The actual synopsis for Vanguard reads a little different: players will “witness the origins” of Special Forces as they “change the face of history”, forming Task Force One in a “sprawling World War II narrative campaign spanning the Eastern and Western fronts of Europe, the Pacific, and North Africa.”

The trailer and details above don’t detail too much about the core Vanguard multiplayer experience, but we do know that Zombies, Warzone and the traditional multiplayer component will return.

Additionally, Activision says that Vanguard will feature “20 maps on day one at launch”, which is huge.

Read more about the Call of Duty: Vanguard reveal. 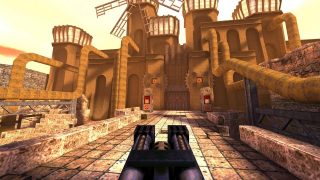