Ahead of the game’s release, fans will be able to go hands-on via the public beta, which was detailed today by EA and DICE.

Unfortunately, while it was hoped the beta would land in late August or September, players will have to wait it out until October 4 to get their hands on the Battlefront II beta, and that’s only if they’ve pre-ordered the game on one of PS4, Xbox One or PC via Origin.

If you don’t pre-order, the beta will open up to the public on October 6, so pre-ordering gives you two full days more.

The beta will have a number of modes and iconic locations. It’ll feature the Theed battle on Naboo, which was on show during the EA PLAY event ahead of E3 last month. The exact times haven’t been confirmed, but we can assume it’ll drop early PST, and then probably early evening on the Australian east coast.

Those that pre-order will have access to the beta for five days, running from October 4 until October 9. All other players will have three days: October 6-9.

There will also be the opportunity to experience the Starfighter Assault battle, which DICE says will be detailed further at Gamescom next month.

If you’ve missed the hype surrounding Battlefront II, there’s plenty of information floating about, videos and previews to fill you in.

Elite classes have also been revealed, while vehicles, pick-ups, and lightsaber battles have also been detailed following the game’s unveiling at Star Wars Celebration at out of E3 last month. Throw in confirmed couch co-op, and no season pass, and it’s hard not to get excited about what Battlefront II brings to the table.

Fans have been bombarding the Battlefront 2 development team across social media and Reddit, and thankfully, there’s been a steady stream of responses coming out of DICE HQ.

Unsurprisingly, although still very important, is that Battlefront 2 will have dedicated servers, an online staple for DICE games dating to well before Battlefield 3.

This confirmation comes by way of design director, Dennis Brännvall, on Twitter, who said that, “like always”, Battlefront 2 will have dedicated servers.

Unfortunately we don’t yet know if that will factor in private or community servers.

Pre-order now to join in the open beta from October 4.

The pre-order image of the Elite Trooper Deluxe goes into deeper detail about each of these four classes. Read more about them here. 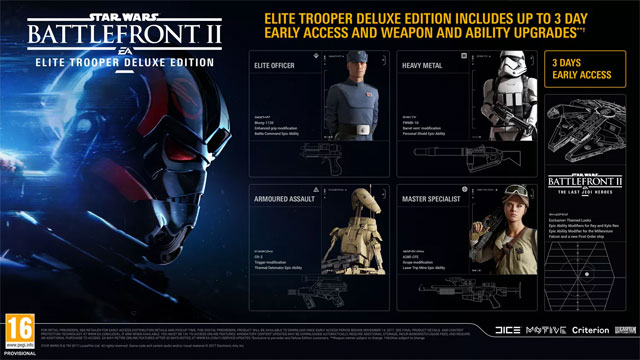 Battlefront 2 will also be offering up a single-play campaign with a fully fleshed story, something fans have been crying out for since Battlefront was first revealed to be getting the reboot treatment at DICE HQ.

We know a few details about the story, including that it takes place immediately after Return Of The Jedi. In the trailer we can see the second Death Star exploding, as was the case at the end ofROTJ.