EA’s pre-E3 event in Hollywood stands to be an exciting showcase of the publisher’s upcoming release schedule, and Battlefield 1 continues to remain relevant with its next expansion, In The Name Of The Tsar, set to be unveiled at EA Play on June 10.

The second expansion, coming after the release of They Shall Not Pass earlier this year, will be released in “late summer”, which puts it at around the July-August window, or perhaps dropped into early September.

We know this based on a new image released today from the publisher, which lifts a lid on the newest expansion for Battlefield 1.

In The Name Of The Tsar is, as you may have expected, an expansion that adds the Russian army, with new maps and new weapons included.

We can also expect to play as female soldiers for the first time in Battlefield history.

The expansion will follow the women’s battalions and the 1st Russian Women’s Battalion of Death. 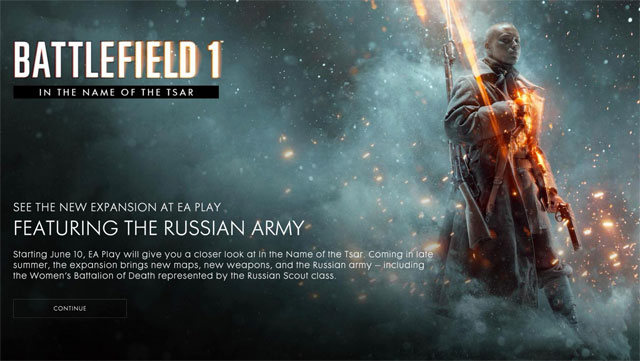 We’ll be at E3 2017, and will hopefully get a chance to check out the new Battlefield 1 expansion ahead of release.