Perhaps the best kept secret in gaming the past few months, Activision and developer Infinity Ward finally lifted the lid off the next addition to the Call of Duty franchise: Modern Warfare.

The fourth entry in the famed series, which started with 2007’s Call of Duty 4: Modern Warfare, will act as a “soft reboot” of the brand rather than a full sequel to 2011’s Modern Warfare 3.

Alongside the much hyped return of arguably the Call of Duty franchise’s most iconic brand is the announcement of free DLC map packs, as well as cross play functionality across PC, PS4 and Xbox One.

“We plan for Modern Warfare to be played together across PC and console through cross-play support,” Infinity Ward co-studio head, Patrick Kelly, said.

It does appear as though the statement and reveal was purposefully vague when it comes to console cross play compatibility for Modern Warfare, with Sony being rather vocal about its unwillingness to allow cross play across consoles.

I reached out to Activision for clarification and to confirm whether cross play would be available across Xbox One and PS4, to which a representative said they “don’t have any further details to share” at this point, but that more information regarding cross play functionality will be released soon.

At this point, given the wording by Kelly and lack of information since, it appears Modern Warfare will likely support cross play across PC and Xbox, and PC and PS4, but without Xbox One-PS4 compatibility. We can gather that by reading between the lines, although we’re happy to be proven wrong: it just seems that Activision and Infinity Ward have been purposefully vague when it comes to that.

As for how cross play is to work at all, a Forbes article, which was subsequently endorsed by Infinity Ward, details how it will be input-based, similar to Fortnite‘s cross play support. This means that PC players will only be able to play with a console player so long as they are using the same input (ie. a controller). So one need not fret about the prospect of getting trumped and smashed by a keyboard-and-mouse yielding PC gamer.

Set to launch on October 25, 2019, Call of Duty: Modern Warfare will hit PlayStation 4, Xbox One and PC at the same time (as always), and will likely still maintain the early-access PS4 relationship that’s existed since Call of Duty: Ghosts. 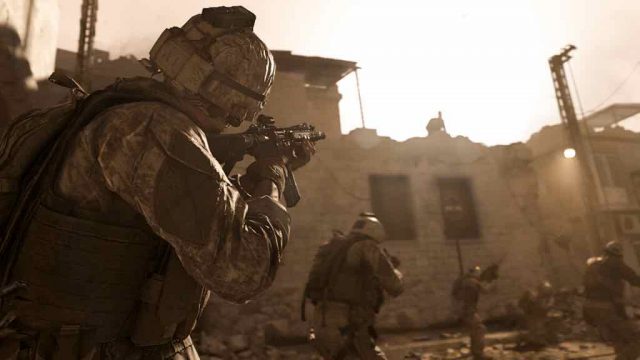 Next →
Overwatch 2 could be set for Blizzcon reveal with larger PvE element
Click here to cancel reply.