If you own PlayStation VR and Star Wars Battlefront, drop everything right now and go play Battlefront VR

Back in August, I experienced something I knew was pretty special, something I know has been every Star Wars fan’s wet dream since they first saw A New Hope on Betamax.

That thing was EA’s Star Wars Battlefront VR experience, and it truly is like a dream come true for the Star Wars fan.

On top of that, I think it might be to PlayStation VR what Wii Sports was to Wii, in that it’s used to demonstrate just what VR gaming can offer.

Except developer Criterion’s effort here is far more admirable, as it’s an entirely new medium with an unknown market, and the experience is already far more engrossing than Nintendo’s bundled-in effort. 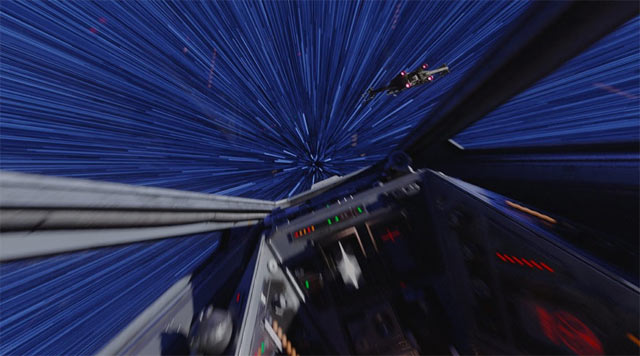 It’s interesting, because I never stopped to think about just how perfect Star Wars — specifically a galactic fight between a group of Rebel X-Wings and Imperial Tie-Fighters — would be for VR. I’ve seen countless VR demos at E3 and gamescom over the years, and I’ve always walked away thinking, “Yeah, that was cool,” but “cool” doesn’t necessarily mean “sale”, and nothing I’d seen had really sold me on VR.

Enter EA’s Star Wars: Battlefront VR (or Star Wars Battlefront Rogue One: X-Wing VR Mission if you have all day). It looks, plays and sounds like a passion project, and is an exceptional interpretation of the those fantasies you are too embarrassed to admit you have about taking part in a Star Wars battle.

Ultimately, while other VR games have done solid means of trying to demonstrate what it is that VR is actually capable of, Criterion’s effort is driven by nostalgic urges, familiar sounds and powerful visuals. 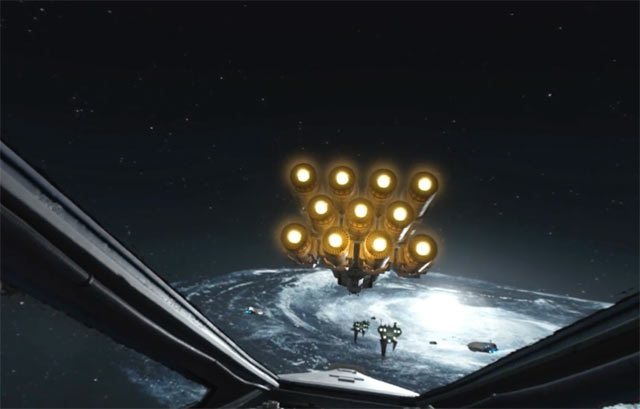 Would we all be so praising of Battlefront VR if it wasn’t Star Wars? Maybe not, but that’s irrelevant: the very fact it’s Star Wars and that it so successfully makes the player feel like they’re part of something big is ultimately what makes it both special and such a wonderful fit for PlayStation VR.

“We are looking for the best PlayStation VR game, and hopefully the best experience for both veterans and newcomers to VR,” Crimmins continued. “It should be an experience for everyone, and it’s free so my hope is that everyone who gets a PlayStation VR will play this experience and will be blown away and will want to play more VR.” EDITOR’S NOTE: This title is free for Star Wars Battlefront owners only

The opening tutorial is itself a thriving celebration of the Star Wars fan, inviting players around and into an X-Wing as they prepare for battle. Once things kick off, it follows the same structure and mechanics of a Battlefront dogfight, but the visual flair of the experience — and visceral delight that the VR offers — ensures it feels like more than “just” Battlefront. 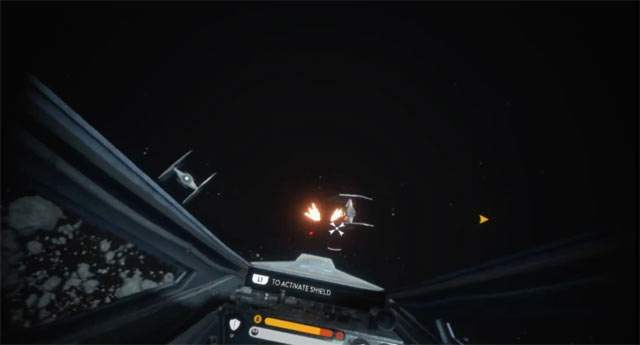 “The feeling we’re trying to invoke, that fantasy of getting into a spaceship, is universal,” Crimmins said when I asked him about the nostalgic appeal of working on a Star Wars game, and the pressure that comes with that.

“It’s not just Star Wars. It’s a fantasy most people have. But there’s also the fantasy of flying an X-Wing. So for fans, as soon as you realise it, as soon as you get in there and see the cockpit, you’re blown away. It’s the exact experience I fantasised about as a kid, playing with my little toys. And then we’re like, ‘Oh God, cool, I’m in it!’”

The main challenge I’ve found in talking to people about the demo is trying to describe how I felt while playing it. VR offers an involuntary delight from just seeing a fantasy world realised.

I actually stole that from Crimmins, because it’s the perfect way of explaining how VR — and in particular Battlefront VR — makes you feel while playing it.

What Criterion and EA have done is create a game that is as good a demo as you could hope for, at least for a product that is still trying to establish a sustainable market.

It’s 15 minutes of pure adrenaline, fuelled by a Star Wars fantasy that is what I think will help define PlayStation VR.

From the initial hyperspace jump, to the arrival of the Imperial Star Destroyer, Battlefront VR is a special experience for Star Wars fans, and is perhaps the demo PlayStation VR needs to build a market.

Check out our full interview with Crimmins below, and then go play Star Wars Battlefront Rogue One: X-Wing VR Mission now: it’s free on PlayStation VR from today.

FENIX Bazaar: Sony made a comment a few months ago about Battlefront VR being what sells PlayStation VR and…

FENIX Bazaar: Well, said said it’s going to really show what VR is about, and what it is about VR that makes it so special.

Kieran Crimmins: How do you feel about that?

FENIX Bazaar: Well, I’ve just played it, and…well, how do you feel about it?

Kieran Crimmins: Well, we are looking for the best PlayStation VR game. Hopefully the best experience for both veterans and newcomers to VR.

It should be an experience for everyone, and it’s free so my hope is that everyone who gets a PlayStation VR will play this experience and will be blown away and will want to play more VR.

FENIX Bazaar: I feel that VR still has ways to go to really define itself, or “sell” itself. I think this game has the potential to do that, even if it is a demo and free, but it does a good job I think in saying, “This is what VR is supposed to be.”

Kieran Crimmins: Well look, the main challenges that we’re facing with VR is that it’s an entirely new media genre. It’s a new thing. So a lot of people have been like, ‘Oh, it’s VR, it’s a bit like a 3D movie,’ it’s a bit like from SD to HD. But it’s a completely new medium.

FENIX Bazaar: Did you struggle, or face any big challenges in making the shift to VR in a studio, in terms of how you go about addressing looks, the feel, how it plays, stuff like that?

Kieran Crimmins: Well whenever you’ve got a new medium, you’ve got to find your feet on how to make an experience that’s actually good on that medium. So when you think of all the cinematic language that we just take for granted, and cinematic language in Star Wars, none of that works in VR. It’s going to take a shit tonne of experimentation to basically reinvent the language for VR, what works and what doesn’t work.

Luckily at Criterion, the way we work, every day we play a build, we readjust for what we think is right for the build, and that just happens to be perfect for exploring new mediums.

That’s why we as a studio are perfectly placed to innovate really quickly, and that’s how we’ve gotten to such a great experience so fast.

FENIX Bazaar: One of my main criticisms of VR is that companies seem to have a divided marketing message. Sometimes it’s like they don’t know what the market is, or who it’s really for. Am I crazy for seeing it that way? Because I think that if you don’t know who your market is, it makes it tough for the product to form much of identity.

Against Criterion pedigree, we like easy to pick up, hard to master kind of games. So we can have that broad appeal, but VR offers such an involuntary delight from just seeing a fantasy world realised.

It doesn’t have a market yet, it’s still finding that, but people need to have a good first experience. Everyone that has it, says, ‘Oh my god this is definitely something I need in my life.’

FENIX Bazaar: Being Star Wars, having so much to work off, that must make it a hell of a lot of easier. Because that fantasy of getting into an X-Wing…it’s not something you can actually get with the base Battlefront game.

Kieran Crimmins: Definitely, definitely. The feeling we’re trying to invoke, that fantasy of getting into a spaceship, is universal. It’s not just Star Wars. It’s a fantasy most people have.

But there’s also the fantasy of flying an X-Wing. So for fans, as soon as you realise it, as soon as you get in there and see the cockpit, you’re blown away, it’s the exact experience I fantasised about as a kid, playing with my little toys. And then we’re like, Oh God, cool, I’m in it!

FENIX Bazaar: How different are the metrics of success for something like this? Either VR more broadly, or Battlefront VR more specifically?

Kieran Crimmins: So what we’re working on is a match made in heaven kind of thing. We’re giving people their first step into VR, but also fulfilling childhood fantasies at the same time. Our childhood fantasy.

This is the metric we’re using to know whether what we’re doing is okay or not. It’s like, are we, as adult game developers, are we doing it like we’re fulfilling a childhood fantasy? If so, we’re probably in a good spot.

FENIX Bazaar: Well, you’ve fulfilled a childhood fantasy of mine, and I’m going to play it again to beat my score, so thanks.

[…] Interestingly, this new Battlefront game will be co-developed by DICE and the Montreal-based Motive, along with Criterion, best known for having worked on the Burnout franchise. The studio also developed the recently-released PSVR Battlefront freebie. […]

Man you're really overdoing it on this one. The Battlefront VR Mission is the reason why I bought a PS4. Since I did, I've been playing SWB's Fighter Squadron mode exclusively because Star Wars dogfighting is my ultimate fantasy. When the VR Mission finally came out, very little didn't disappoint me. And that's not because my expectations were very high. It's rather that the guys didn't put their work into the right stuff. The result is plain boredom. I did get a tiny thrill for being in an X-Wing cockpit, but then I just waited, and waited, and oh let's fire 2 blasters to kill that TIE so slow my grandma could indeed kill a hundred in no time, and waited, and oh what was that U-Wing android? probably doesn't matter, and waited, and oh my god that X-Wing is so slow it couldn't do much more than following other slow X-Wings for 10 minutes anyway, and waited, and blasted anither TIE, and waited, and oh blasting that part of the cruiser is what did it after all, now the U-Wing dude is so happy I'll just call at home base. What a relief, it was getting overwhelming. Thanks for nothing Criterion, I'll just get back to Eve Valkyrie while you continue crafting overdue proofs of concept that fans of SW who want to actually fantasy-dogfight even for just 5 minutes won't bother playing more than twice. I'll be nice, SW really turns me on, but I got so much more thrill by sitting in an arcade cockpit playing the oldest SW dogfighting game, or just playing the Fighter Squadron mode on my flat screen, than with this bulls*** VR Mission you can only enjoy next to granny and her afternoon tea.