The latest Civilization entry feels familiar yet strangely foreign. I approached it as I have every Civilization game before it: settle my people, build a city, forge a strong military, work on my culture, expand, repeat. I rushed into Civilization 6 with a fairly sound knowledge of the basics, but soon realised that it was a different world, one I wouldn’t call punishing, but rather fickle in its contempt for ambition. That’s how I have always approached my new empire in past games, with an ambitious urge to grow, thrive, and learn at a rate faster than other empires around me. The crux of the Civ experience has remained unchanged, yet the nature of progression — and the consequences of expansion — are relayed with a combative itch that can promptly erode any sense of pride or ownership. Civilization 6 is a noble game in that sense: it seems to care more about your people than you may have ever thought to in your rise to domination.

It achieves that in a few ways, with subtle changes that keep the experience grounded in familiarity, along with some crucial applications of differentiation. It would be telling if a game about domination, evolution, culture and technology didn’t improve upon its predecessor, and while Civilization 6 doesn’t shout down from the rafters about its changes like Civ V did, there’s a deep core, one that bestows upon the player a level of responsibility not offered in a Civ game before.

An important change in Civ 6 is the evolution of Worker to Builder. In past entries, Workers were used to either manually or automatically complete improvements across the map, or build specific areas (like a mine or farm) that utilised a certain tile’s minerals and materials. Builders work in a similar way, however this time they have a set number of tasks before disappearing from the map. This forces a strategic approach to planning and improvements, as most tasks — including terrain improvements — happen instantly as opposed to over a number of turns.

I appreciate the change, but it’s something you might not really notice until deep into your game. In the early stages of my Chinese empire (which also grants you four Builder task slots, compared to the three afforded to all other empires), I used my Builders to work the lands, and soon found my cities surrounded by thriving farmland, mines and digs. It created a nice sense of reward in those early stages of my game, however I came to really appreciate the change once I realised how much more streamlined that element of the experience had become. For one, I would focus on a specific Builder, set them a task, and then immediately delegate another job. In past games, I’d forget about a Worker who was building a road or whatever else; some tasks, particularly on higher difficulties, would get lost amidst the action and progression my empire was making over multiple turns. 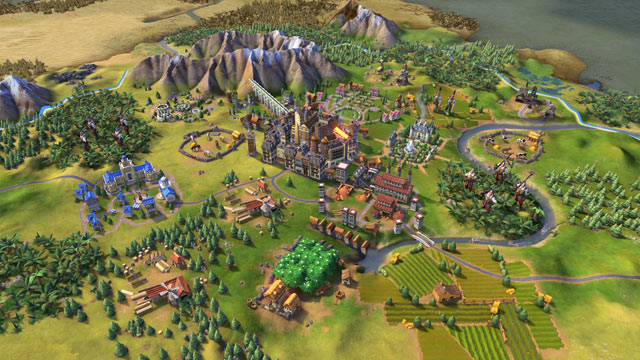 Developer Firaxis has been fairly vocal in its effort to improve unit placement and reduce the amount of congestion on a map, and the changes to the Builder unit really help with that application. It was easy to just forget about your Workers in past games, and you could end up with a map filled with unused units who would have completed every single improvement needed. Of course, improvements would soon again be required, but those Workers would just stand idle, taking up valuable space.

This takes me to my next point: automation. I used automation a lot in past games because it was just “there”. Being able to delegate and automate a Worker’s tasks meant I didn’t need to worry about that, but now that it’s been removed from this unit, it’s amazing how much more engaged I feel with my land. I was admittedly concerned about Civilization 6 being turned into a Revolution clone (as great as those games are) in terms of over-accessibility, but this change actually encourages — forces — you to strategically place and task Builders. Civ 6 has taken what was once a mindless element of the experience, and turned it into a thoughtful, planned aspect that demands your attention. This is a strategy game, after all, and it’s interesting how I never really looked at automation as being the antithesis of the strategy philosophy, at least not until I experienced it without it.

A change I feel might be celebrated by older Civilization players is how Happiness is no longer empire-wide. This brings the system back to the days of Civ IV and earlier. Each city in your empire is now responsible for their own happiness, which you’ll need to manage with necessary amenities like housing. 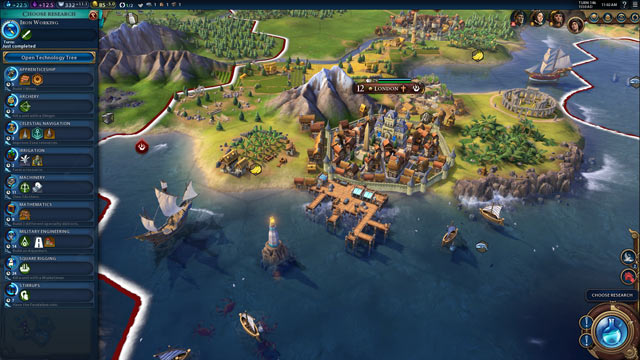 This creates a strange sense of urgency and a shift in focus from expansion to micromanagement, something I feel was limited in Civ V. While playing Civ 6, I struggled to keep one of my initial city’s happiness up, which forced me to completely change how I played to be able to research the necessary technologies and build the required buildings to appease the people. It adds a dynamic layer of management that had me focused for a good hour of my play time, simply as a means to turn my city’s fortunes around.

Jumping into Civ 6 for the first time, I was most keen to check out the new boosting system, which can gift you a 50% boost towards a certain technology. The underlying system here worked surprisingly well, and didn’t really discourage me from researching other sciences like I thought it would. More seasoned players might disagree, but I feel that the 50% boost is a sweet spot that keeps it balanced enough next to the hard yet rewarding slog that is research.

These boosts stay with you forever, and tend to be rewarded after you complete specific tasks. Most of these tasks are stock-standard Civ fare — I received a military boost early on for taking out a Barbarian outpost — while others, I assume, are a little more advanced in their conditions and application. It was one of those systems that I initially kept forgetting existed, even though it kept popping up whenever I had unlocked additional boosts. In that sense I guess it’s a good thing that it’s not bombarding you to boost certain sciences, and stays grounded in the background in the same way the game’s government system has across the entire Civ franchise.

Looking at that government system, I like that it feels less restrictive in how you might approach a shift in political focus. Researching civics unlocks colour-coded cards, which can then be used in a government’s corresponding matching slots. The UI could do with a little work here — I initially struggled to match the colour-coded cards with the corresponding boxes — but I like the foundations being set. Different forms of government have different slots, so depending on which direction you head in, you may have three military slots and and three economic slots, or perhaps two economic slots, two military slots and two diplomatic slots. These cards offer bonuses, and one of the earlier ones I utilised offered more income from trade routes.

The risk for Firaxis here was creating an overly-simplistic system, but there are restrictions. You’ll need to pay gold to change the cards at will, although you can do it for free once you actually earn new cards. That means you can strategise and mix-and-match cards if you want to head down a specific route. Cards are rewarded fairly frequently early on as you establish your empire, so there’s a nice learning curve there for you to understand the fundamentals. 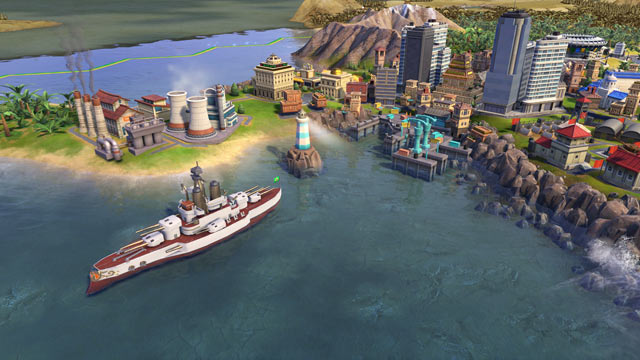 This really ties into your diplomatic credentials. If you’re anything like me, the political system you focus on tends to dictate how you deal with and respond to other leaders. In Civ 6, the whole system seems far more detailed. For one, when you first meet a new empire, you can invite the leader to your capital city, which will unlock that area of the map for them and increase your diplomatic level (there are five levels), and this works both ways (pending you’re invited, of course). Work on your relationship with a leader and this can enhance you knowledge of their empire, from their Wonders progression, to how far they are in achieving victory under a certain condition. It pays to be diplomatic, but choose your friends wisely.

I briefly touched upon diplomacy with City-States, and from what I can tell it’s a far more detailed system than in Civ V. In order to establish a relationship with a city-state, I needed to allow envoys to visit them and complete city quests. These envoys work in the city-state’s favour, so as you can imagine, permitting them will increase your relationship with them. What I liked about it was the added complexity of getting them on your side, as opposed to simply bribing them with a heap of gold coins like in Civ V. That was boring and too easy, and like automation, was something I didn’t realise was too simplistic for its own good. Earning a city-state’s trust will grant you bonuses, like exotic resources, or perhaps immediate conversion to your empire’s religion of choice.

Heart Of The City

Districts make up one of the more confronting changes in Civ 6. Empires now spread out beyond the borders of any specific city, allowing you to build districts in certain areas, which generate certain advantages for your people. During one of my play throughs, I had honed in on creating an empire with strong Faith, and as such created religious districts to enhance the faith of my people. These districts replace builder tile improvements, and take up an entire hex. You can advance beyond this, building certain amenities not otherwise available without the corresponding district. A science district, for example, allows you to build a library within your borders, also taking up a hex.

What this system has created is somewhat of a city-building puzzle: do you replace improvements with a district, or save the district for another area? How will it work with the terrain? Unfortunately, I didn’t get nearly as much time tinkering with this system as I would have liked, but it’s clear that there is a deep layer of bonuses for buildings and cities that sit adjacent to these districts. I know that having a science district near mountains, for example, will add an additional boost to science on top of what they were already providing for the city when you first settled.

I initially made a lot of wrong decisions in my city planning, and I suspect a lot of other players will as well on their first play. In some instances, my districts were close to borders, which made them vulnerable to enemies. When I was attacked, the districts went down with high-production buildings, which really hurt my people and cities. In that regard, the system works well to completely redefine the approach to city planning, in that planning never really existed in a Civ game to begin with, at least not to this degree. It’s now part of the strategic approach that dictates advancement and, inevitable, military strategy.

What Dreams Are Made Of

After playing 200 turns, I found myself dreaming about Civ 6 whenever I closed my eyes. It still encompasses the addictive fundamentals that make the franchise so great, but with new additions that add a fresh layer of strategic planning. I wish I had more time to tinker with these systems to test them out against the longevity of a standard Civ game. However, as it stands, these additions held up spectacularly well in my playing time, managing to keep the Civ 6 experience feeling familiar, but also fresh enough to evolve beyond its predecessor.

← Previous
No Man's Sky hype propels it to No.1 on Steam charts 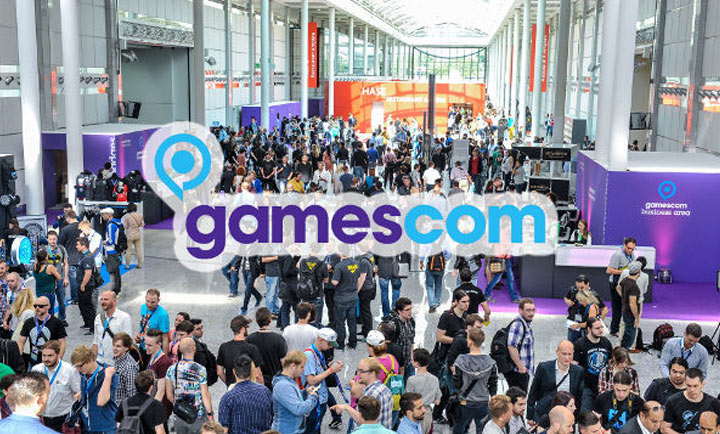