It’s been a long time between drinks, but we may be set for some new Overwatch 2 if the latest tease from cinematic director, Jason Hill, is anything to go by.

Hill has taken to Twitter in a rather casual and sort-of-flirty way, sending Overwatch fanatics into meltdown that maybe, just maybe, we may have some new Overwatch 2 content on the way.

It would certainly be a welcomed turn of events, with Overwatch‘s recent events falling flat, and Blizzard essentially going silent on the Overwatch 2 front, presumably until Blizzcon 2021 early next year.

What Hill gave us isn’t overly detailed or all that much to get excited about, but it at least points to something being worked on for the game. We know that obviously Blizzard is hard at work on the game but it’s been easy to forget about Overwatch 2 given it’s been over a year since we heard or saw anything about it.

Ask any Overwatch fan how they feel about Overwatch 2 and you’re almost guaranteed to get a subtle “grunt” in response. Following its November 2019 reveal, Blizzard has essentially put the game under wraps, with murmurs suggesting Overwatch 2 could even be released during Blizzcon 2021.

Nonetheless, the gameplay trailer that did come out of Blizzcon 2019 was pretty great, and even unearthed a perceived new character, Sojourn, who is expected to join the Overwatch 2 hero roster from day one of the game’s launch.

It now appears as though Sojourn may be getting the new hero treatment cinematic very soon, if Hill’s latest Tweet is anything to go by.

“Happiness is having a great VO session,” Hill Tweeted. “Here’s a photo of Sojourn for no particular reason.” 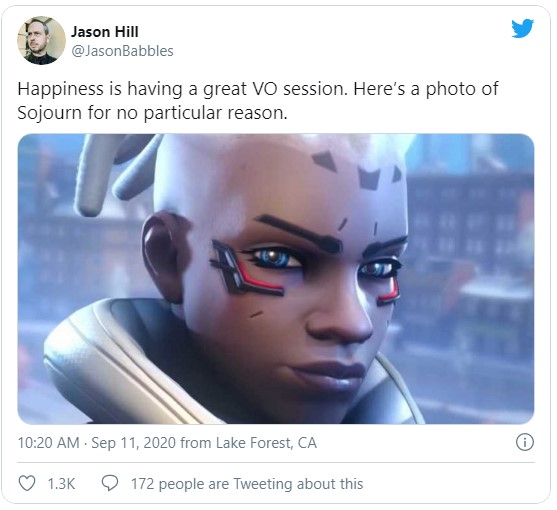 There’s not much known about Sojourn the character outside of what was in the initial gameplay trailer, as well as what game director, Jeff Kaplan, outlined back at Blizzcon 2019.

“Sojourn is right at the center of the story of Overwatch 2,” he said on a panel at the time. “So we hope you liked her in Storm Rising. You’re going to spend a lot more time with her.”

There’s so much uncertainty following not just Blizzard and Overwatch 2, but the entire games industry. Blizzcon 2020 has merely been pushed back to early 2021 rather than cancelled all together, but all signs at the moment point to the likelihood of a digital-only event.

Fans have been clamouring for any and all information related to Overwatch 2, but Blizzard appears hellbent on keeping its lips sealed shut until it can host its flagship event.

Next →
NBA 2K21 Patch Notes: Update 1.02 with major changes to shooting, My Career, and more
Click here to cancel reply.