Last month I spent about 30 minutes with Wolfenstein II: The New Colossus, diving into an introductory stanza that set a seemingly insurmountable benchmark for the rest of the game.

It easily met the first game’s standards of run-of-the-mill good guys vs bad guys gunplay, managing to shoot well beyond it into a field of weird hilarity and stunning difficulty. There is a celebration of excessive violence and wit, amplified by a haunting and grandiose soundtrack, core pillars of the MachineGames Wolfenstein games we’ve come to know and love over the past few years.

I’ve gone back for seconds, this time spending close to two hours blasting my way through Nazis, and testing the waters on a far grander — and tougher — scale.

Something stands out almost immediately in those opening moments: The New Colossus wants our hero to be vulnerable, confined to a wheelchair in a compromised environment. It successfully builds upon The New Order‘s forgettable opening few missions, all the more surprising considering BJ Blazkowicz’s restriction.

I dropped down a difficulty level for this second attempt, opting to experience and establish a more confident approach to the combat than I did during my E3 playthrough. The game’s opening moments still do feel like a tutorial — more so on the easiest difficulty — but there’s still an intimidating sense of pacing and combat that makes for an engrossing, albeit at times frustrating introduction to the experience.

Set on a stolen Nazi submarine, The New Colossus opening mission takes a few risks with its level design, blending a strong sense of creative urgency and freedom, with a confronting level design that’s brimming with surprises. While it was hard to lose my way, almost every passage way was countered by a bottleneck of Nazi soldiers. This means that whenever I felt like things were slowing down, the game decided to jam a wrench into BJ’s already severely damaged lower waist. Remember: this opening mission acts as the game’s tutorial, thrusting a wheelchair-bound BJ into a tight, chaotic environment filled with Nazis and, of course, microwaves that evaporate bodies in microseconds. What’s a Nazi shooter without crazy Nazi science weapons and whatnot?

I spent a bit more time working around the game’s melee offerings, which I was allowed to do in this easier experience. What I discovered was that The New Colossus, much like its predecessor, can be a punishing beast, even on the easiest difficulty. BJ’s health is capped at 50 as opposed to the traditional 100, and while health packs and armor are widely available and scattered throughout the level, it often still isn’t enough to get through unscathed, especially if you’re trying to push through without firing a bullet. Most of the Nazis you encounter early on are packing some pretty heavy armor, and this can make the melee feel somewhat finicky early on, but it still acts as an effective way to avoid the more heated moments of combat.

And those moments happen often and at break-neck speed. Enemy AI is always on its toes, and it’s tough enough to avoid detection without having to actually engage in a firefight with them. The New Colossus sometimes feels almost too difficult, but it’s got me thinking about the standard and intention MachineGames is trying to establish here. I eventually always found my way through bottlenecks, simply by playing that little bit more cautiously, although sometimes the experience really does call for you to go in guns blazing, dual-wielding some machine guns and blowing shit up. My E3 playthrough was bordering on impossible on the second lowest difficulty setting, while the easiest setting still feels like what Hard would be on most other shooters.

I admire this and genuinely hope it remains this way, because in both of my playthroughs I felt as though I had genuinely achieved something when I’d made my way through an area. The New Colossus can be as effective in stealth as it is heavy-handed combat. If you opt with the fire punch, Nazis, dogs and giant fire-breathing robots will come at you from every direction, but this is balanced out next to stealth mechanics that call out for precision, timing, planning and caution: it doesn’t just feel tacked out, like an “Oh, you can also play this way” sort of application. In reality, The New Colossus offers both ways to play as similarly balls-to-the-wall hard, so it never feels like there’s an easy way out.

The second mission I played through — and the one I was most looking forward to — had me walking the streets of Roswell, New Mexico. Acting as somewhat of a mini-base for the new Nazi power structure that’s taken over the US of A (and probably the rest of the world), this interpretation of a fallen Western superpower offered a fascinating insight into MachineGames’ vision of a potential future. The task was simple — meet up with a conspiracy-theorist collaborator that owns a burger diner in town, and use his hidden tunnels to find the Nazi base and blow it to smithereens — but I found myself strolling the streets of Nazi Town USA, and laughing at the dialogue and setting. Hearing Nazi soldiers mock and jeer a bunch of Americans strolling the street had me wondering just how purposefully ironic the game’s take on ridicule and violence was, next to the real world’s current political climate. 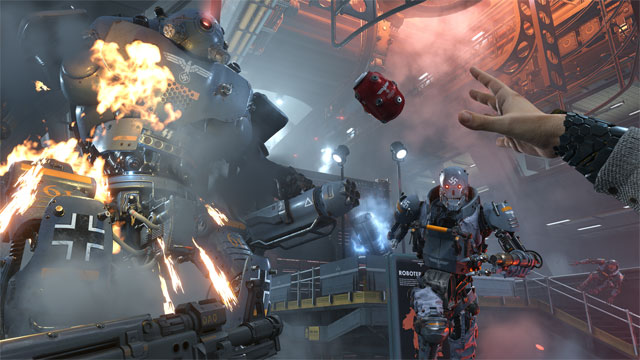 It’s probably not as simplistic as I think — or want it to be — but MachineGames has still created a world that is compelling enough as to actually seem like a potential future for the modern world. The New Colossus’ Roswell is the same, but different: privately run businesses still appear to be flourishing, but under the watchful and hostile eye of Nazi soldiers, always keen to undermine and step over the common Joe.

There’s an impressive balancing act between the game world’s tongue-in-cheek approach to a fascist takeover, and the underground movement aiming to “destablise the fucking country”. The New Colossus never takes itself too seriously, and the Nazis really are portrayed as the game’s comic relief, but there still appears to be serious and important messages hidden beneath it’s at-times slapstick approach to confrontation and relationships, particularly in scenes featuring BJ’s allies.

Moving beyond this world and into Nazi heartland, The New Colossus takes a turn towards sheer unpredictability and devilish difficulty, amping itself up into a cluster of scientific quackery and “Oh hell yeah!” gun battles. It never forgets what it wants to be, and that’s an all-out, straight-up shooter, but there’s a good balance of subtle puzzle solving, stealth offerings, and exploration that keep The New Colossus experience feeling rewarding. It may yet see some tweaks to bring that difficulty level down, but I hope it doesn’t, because it currently stands as an important benchmark for the genre. That difficulty ties in well with a narrative that can feel strangely familiar, and MachineGames needs to ensure the game’s identity remains unique compared to other servings in the genre.

Wolfenstein II: The New Colossus launches October 27 on PS4, Xbox One and PC