Halo Wars 2 makes a strong case for early Game Of The Year consideration.

I went into this sequel — a collaboration between 343 Industries and genre stalwart Creative Assembly — being a modest if fickle fan of the original Halo Wars. As someone that appreciates the complex gameplay philosophies that drive the RTS genre, I admittedly always saw this spin-off series as somewhat of an abomination.

However, I’ve come to realise that embracing accessibility — a prerequisite when bringing a PC game to a traditional controller — doesn’t necessarily come at the expense of gameplay depth. Halo Wars 2 proves this.

There’s a really delicate balance in place that sees Halo Wars 2 successfully battle perceptions of simplicity. Whenever the experience threatens to head down the path of the dumbed-down console RTS, it suddenly starts to demand strategic precision from the player.

It does this a number of ways: sometimes it seems to just ramp up the difficulty, other times it genuinely teases and tricks the player into thinking a mission is more linear than it actually is. I even admittedly often found myself simplifying my approach, as I never quite expected this game to get as complex, rapid and combative as it does.

It would be wrong to not point Halo Wars 2’s obvious connection to the console platform, because even as good as the game is to play with a mouse on PC, it’s hard to ignore the fact the game was built to be played with a controller.

That’s not to say the game isn’t competent with a keyboard and mouse. I just don’t think you can explicitly direct people to one platform or the other; it’s refined and perfected for console, but at the same time you can’t ignore the convenience and added intuitiveness of playing with a mouse.

Halo Wars 2 certainly takes the genre to new heights on console, and while it doesn’t quite head into the same territory of genre heavyweights, it’s expanded beyond what the original was able to achieve, and it’s clear that Creative Assembly had a lot of influence in that regard.

Subtle but important additions like D-pad shortcuts make giving specific unit orders a real breeze, and it’s probably the best method of unit control that I’ve seen mapped to a traditional controller. Being able to customise it and set specific units is particularly useful when playing on console, and the game never gets too out of hand where the D-pad is insufficient for such necessary in-game shortcuts.

A standout feature — for better or worse — in Halo Wars 2 is the grouped unit huddles, in which you can bundle each of your 80 soldiers together to form a single, moveable unit. The problem, however, is that you can’t manage individual soldiers, so a unit of UNSC grunts or Cyclopes’ come in groups of 3 or 4, which actually counts towards your active unit number, as opposed to one single grunt acting potentially as one unit.

This I feel suits the natural design structure of the maps, and is certainly more at home on a platform that is obviously restricted by the controller. This doesn’t change on PC, so there’s something that obviously holds the game back from embracing the complex micromanaging of the genre’s heavyweights.

It’s here that Halo Wars 2 actually succeeds in finding a solid middle-ground between something accessible for genre newcomers, and those looking for something a little different from the genre. Units being bundled as such now have a higher grouped value to your battlefield structure, so while you’re not scurrying about trying to manage 80 different units, you’re actually micromanaging in a different way, constantly trying to find ways to perfect the positioning of your Warthog and your long-range snipers.

Initially, this balancing act isn’t so much of an issue, because the game’s first five or so missions act as small albeit at-times challenging introductions to a surprisingly tough second half. Halo Wars 2 finds ways to punish you, particularly if you’re obsessed with unit stacking and not on actual defense. Early on, however, it’s easy to recover, but not without a few harsh lessons learned.

Once things pick up around mission 6, there’s little room for error on Heroic. Even on Easy, objectives can quickly turn against you, and stealth attacks against an undermanned base can essentially ruin any and all chance you have of success. Losing in this way after almost an hour is tough, but that’s the nature of the RTS beast: understate the might of the enemy, and you’re inviting defeat.

There’s a constant evolution of tools, resources and abilities available to you as you progress: leader powers can be useful or brutal ways to turn a battle back in your favour, but again, they dictate the same sort of strategic patience and planning — even on easy — that makes Halo Wars 2 are far deeper and complex game than it would ever admit to being.

In one scenario, I had my squad aiming to protect a charging beacon at the bottom of the map. Initially, I pumped by base with resources and power, and then stocked up on heavy grunts and on-ground vehicles. Eye scouts in each corner of the map informed me of incoming enemies aiming to attack the beacon, but I had failed to provide cover to both my base as well as the clear pathways that led directly to the vulnerable barriers protecting the beacon.

I soon found myself spamming leader powers, dropping missiles and turrets down onto enemies in the hope I could regroup and rebuild by warchest. However, such was the nature of the battle up to that point, I found myself retreating back towards the becon, as all of my defenses had been destroyed. While I was preoccupied, I let my guard down at the base, and suddenly my only source of resources and reinforcements was gone. After 45 minutes, I had played myself into complete and utter annihilation.

That was not just through an enhanced sense of AI awareness and tactics. The game gets progressively harder, sure, but the map design needs to be applauded here, because you’ll find yourself in a constant race to cover all of your bases. Where Halo Wars 2 lacks mechanical depth next to traditional genre favourites, it makes up for in sheer determination to utterly pound the unaware and unprepared player. 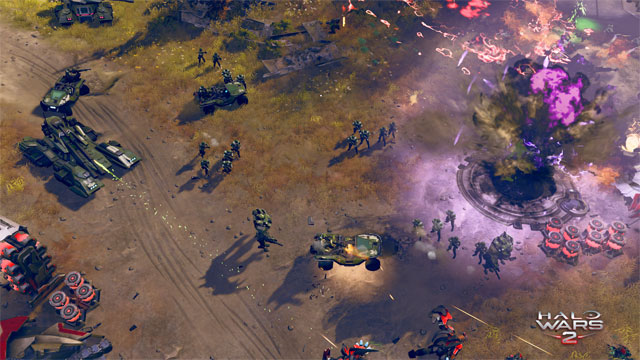 Throughout most of the campaign — which clocks in at 6-7 hours on easy, and anywhere between 8-12 beyond that — I generally found myself able to get things back under control, but it’s easy to get complacent in a game that some feel doesn’t belong. Halo Wars 2 makes a really strong case for its place in the genre, while its self-sustaining story and villain make up for one of the more enthralling and entertaining in recent years for Halo.

Once I pulled myself away from the campaign, I dug into the new Blitz mode, which promises to be a special additional to the game’s multiplayer scene. You’ll earn (or buy) packs of cards, and use these cards to unlock units, abilities, features and the like in your battle against opponents, be them AI-controlled or human. My battles with the AI were fun and hectic, different from the campaign where you always anticipate and know where they’re going to be whenever you restart a battle.

Blitz, on the other hand, offers up a sense of unpredictability and chance that can really propel Halo Wars 2’s online offering into greatness. Other multiplayer battles are similarly tense, and stand to offer the best of what Halo Wars 2 can do, even though I personally came to enjoy playing alone a lot more (I just can’t personally handle the tense nature of an online RTS). Strongholds is probably my favourite mode, because it feeds into my unwillingness to walk straight into a slaughter against Halo Wars diehards.

In this mode, players essentially have unlimited resources, while leader points are unlocked at random for every player at the same time. This creates a tense battle, but everyone is on even footing, so it’s really a battle of how quickly you’re able to generate, move and upgrade units. That’s the general nature of any RTS multiplayer match, but Stronghold is more of a free-for-all, and I noticed that player skill and patience had less influence with the focus shifting towards brute force and speed.

The action really takes off in Blitz, though, and although I know 343 says it has no interests in bringing it into the eSports scene at the moment, I can see the potential here. It’s hard to gauge popularity or just how deep and strategic the mode will get at launch, but the foundations in place are strong and impressive.

Halo Wars 2 goes to great lengths to establish the spin-off franchise as a self-sustaining premiere Xbox brand. It’s not difficult to pinpoint what the standard console RTS lacks next to PC competitors, but Halo Wars 2 never really tries to be more than what it actually is. Creative Assembly has obviously contributed quite a lot here, helping 343 craft a deeply compelling and enjoyable console RTS, and a great story to compliment it.

Nice.  Ive read mixed reviews on this title.  I think I'm interested enough to pick it up.