Pokémon Sun and Moon: The breath of fresh air the franchise desperately needed

After spending an entire weekend playing Sun and Moon and not doing a whole lot else, I’ve come away gobsmacked by some of the subtle and not-so-subtle changes made to the classic Pokémon formula. The most obvious of which is the shake up to the games’ overall structure.

Pokemon games of old would see you embarking on a quest (to be the best like, no one ever was) to challenge and defeat eight gym leaders, before moving onto the Elite Four and becoming the regional champion. Sun and Moon drops all that in favour of the island trials.

Varying in scope, trials demand the player undertake unique challenges before facing off against a specially powered wild Pokémon, known as a Totem Pokémon. Each island in the stunning, Hawaiian-inspired Aloha region has a set number of trials players need to complete in order to face off against its kahuna – a person sort of like a gym leader, but more like a community leader than someone standing in a building waiting for challengers.

What I like most about the trials is how they radically vary from each other. For example, one trial requires you to undertake a sound-based quiz in the dark, while another demands you spot the difference between three Pokémon performing a ritual dance. And unlike gyms, trials create a more natural sense of progression as you move through the game’s story. They don’t feel like hurdles you need to overcome in order to proceed, presented instead as more organic challenges, which better fit into the context of the game’s over-world. This ties specifically into a new feature I absolutely love: the removal of Hidden Machines. 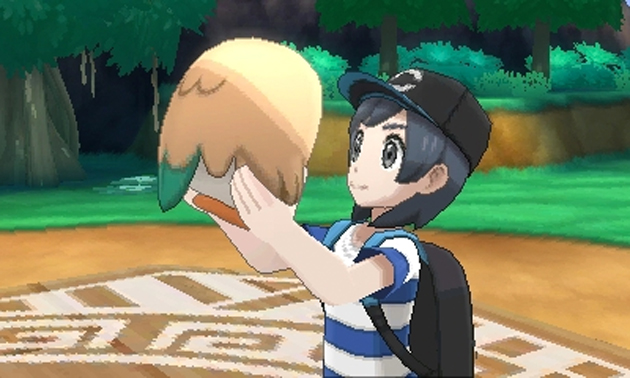 Hidden Machines (or, HMs) have been the bane of Pokémon players ever since the original Red and Blue, and are often used by Game Freak as a gating mechanic to block players from venturing past a certain point until they obtain the specific hidden machine to progress. It’s terrible practice and one that always seemed at odds with the incredible sense of adventure these games instill in the fanbase.

Moves like Surf, Fly, Strength and Waterfall are all HM moves, and crucial to game exploration. You can’t travel over bodies of water and discover new areas unless you have Surf, nor can you fast-travel to points of interest without Fly. As the generations wore on, more HMs were introduced, requiring even more real estate in Pokémon movesets. Worst still, HMs can’t be removed unless you visit the Move Deleter (who didn’t appear until second generation).

Thankfully, Pokémon Sun and Moon does away with all that nonsense and replaces HMs with Ride Pokémon, a brand new function that lets you summon specific Pokémon to the effect of HMs. Summoning Charizard allows you to fast-travel (Fly), whereas Lapras lets you traverse water without Surf, and Tauros smashes through path-blocking rocks like Strength. Ride Pokémon still need to be obtained through natural game progression, but their inclusion is a warmly-embraced addition to Sun and Moon.

Beyond these new major changes to the formula, the seventh generation games introduce a wide number of subtle yet welcomed tweaks.The most notable of which can be seen during Pokémon battle, via the redesigned screen displayed on the 3DS touchscreen. On it, you can see little icons of the Pokémon currently battling it out on the 3D screen above. Tapping on either of the icons displays the status condition of each monster, informing the player how drastically their Pokémon have been affected by stat-altering moves such as Growl or whether they’re confused. Previous generations have always left it up to the player to track these otherwise hidden afflictions, and unless you’re paying absolute attention the whole time it can be easy to lose track.

It’s a move to make these sorts of hidden elements to the game much more transparent, not unlike how Pokémon X and Y brought EVs and IVs to the fore. These two previously complicated and difficult to determine values underline how powerful a Pokémon was, and the move to make them more accessible opened a brave new world for many fans, including myself. Sun and Moon of course expand on the foundations of the previous generation through the introduction of the Pokémon Festival and Hyper Training.

The battle screen also now allows you to see how effective a Pokémon’s move is when used against your opponent. A little icon will appear alongside the move, indicating whether it’s not effective, effective, super effective or will have no effect. It’s a great way for newcomers to begin to understand the type match-ups, while also serving as a nice reminder for veterans who can’t quite remember whether Rock is effective against Bug (it is). Though it does rely on you having already encountered the Pokémon previously, so upon seeing it for the first time those icons won’t display next to your Pokémon’s moves until the next time you meet them in battle.

The breadth of changes introduced in Pokémon Sun and Moon is phenomenal. From sweeping changes to the game’s structure and progression, to removing a once-core game mechanic, and dozens of more subtle tweaks that improve the quality of the player experience, there’s so much for a Pokéfan to love about generation seven.

Tell us: what’s your favourite new feature about Pokémon Sun and Moon?

← Previous
Pokemon Sun And Moon Technical Machine Locations: Where to find every TM

Next →
Uncharted 4 Survival Mode: Everything You Need To Know
Click here to cancel reply.