Getting the feel of sword fighting just right in games is tough. Treyarch tried it in 1998 with Die by the Sword: a game ahead of its time, with the option to fully control your sword arm via one-to-one mouse movements. Die by the Sword never had a sequel. Nowadays, Treyarch makes games in a wee series you may know called Call of Duty.

More than a decade later, indie developer Torn Banner Studios turned its popular Age of Chivalry mod into full-fledged release, Chivalry: Medieval Warfare. The sword-swinging accuracy of Die by the Sword was shunned in favour of an easy to learn, but tricky to master weapon-wielding mechanic that allowed for feints, slower strikes, and speedy counter-attacks after a successful block. It also favoured offence over defence, in that a player hoping to block a strike had to keep the tip of an enemy’s weapon in the centre of the screen with a well-timed block in order to deflect it.

For me, Chivalry was ruined by glitching players and Torn Banner’s apparent unwillingness to address these glitches, which meant you either learnt to glitch, or you stopped playing. I was in the latter camp. In 2015, Torn Banner ported Chivalry to console, and while I was hopeful it would make for a fairer (thanks to a lack of mouse glitches) gameplay experience, the port left a lot to be desired.

Fast-forward to today, and Ubisoft Montreal is the latest developer taking the sword-combat idea for a swing, this time with new IP For Honor. Game director Jason VandenBerghe said he had the idea for the control mechanic a decade ago, but it’s a system that initially concerned me because of its simplicity. 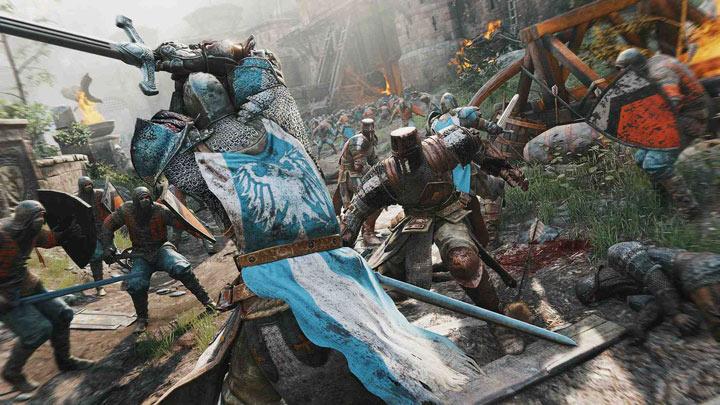 In For Honor, attacks and blocks are dictated by a three-tier guard system. Hit left, up or right on the right joystick to shift your guard between left, high or right sides, respectively. If an attack comes from the side you’ve set your guard to, that attack is blocked, assuming you have enough stamina to do so. To attack, hit the right bumper for a fast attack, or right trigger for a slow and heavy attack, and that strike will come from one of the three stances you’ve set your guard to. Simple.

Like Chivalry, For Honor favours a system that’s easy to pick up, but as I learnt at an extensive hands-on session earlier this week, there’s a satisfying amount of depth at play when you combine these simple attack/defence mechanics with a few other easy-to-learn features. My preview started with the opening level of the game, which was a tutorial (albeit a fun one), for all intents and purposes.

Still, that introduction to the core game mechanics is an essential starting point for the multiplayer modes. Outside of the basics listed above, players can also make use of a guard-break button to stun overly defensive enemies, a dodge button that also rolls (when not locking on to an enemy with L2), and the D-pad arrows act as quick-select options for various unlockable abilities.

One of these abilities is additional health, which is handy in a pinch, particularly given how quickly battlefield dominance can descend into frantic blocking and defensive manoeuvres to deter death because of a shift from the winning team to the underdog. As for the other abilities, well, I didn’t try them out, because I was so engrossed in the tactical nature of head-to-head combat once we jumped into the Dominion multiplayer mode.

Dominion is a 4v4 mode that tasks competing teams with capturing and holding three areas of interest. At least according to the two maps we played, the two flanking points seem to be free of enemy AI, while the centre has incredibly squishy AI-controlled troops battling it out until the heroes (that’s the players) clear out enough minions to occupy the capping zone and claim the point for their team. Killing AI foes, who die from a single hit, is incentivised by offering health for their deaths, and the only other way to restore health in Dominion, outside of the aforementioned D-pad ability, is to stand on a captured point.

The middle point is a pain, though, as it’s too easy to get lost in clearing AI minions while an enemy player flanks to attack you from the side or from behind. This dishonourable tactic certainly isn’t exclusive to the centre point, but it made the other points more attractive capping alternatives. Once you cap one of the zones, your team takes 100 points from the enemy team. As soon as one team hits 1,000 points, the opposition loses the ability to respawn, unless surviving players recapture points to bring the enemy score below 1,000.

It’s a neat system that deters camping (even if there is a minor point bonus for defending a zone) and incentivises players to shift between points to preserve their ability to respawn. Working in groups of two is a great tactic, and tends to make a sole defender run, lest they risk death and the subsequent respawn countdown (assuming their team can still respawn). Once again, it’s not an honourable tactic, but it’s the quickest way to take down a solo defender, particularly one who’s proficient at blocking.

If you’re distracted by a player in front of you, it’s all too easy to get stabbed in the back, or have your speedy exit cut off as the domination of the battlefield ebbs and flows between two evenly matched teams. As it stands, outside of feeling dirty for ganging up on enemy players or stealing kills, the only deterrent at the moment for not sticking to one-on-one duels in Dominion is friendly fire. It’s very lenient, though, and doesn’t deal as much damage as being hit by an enemy, which means that overzealous slashing next to a teammate is a completely viable strategy. 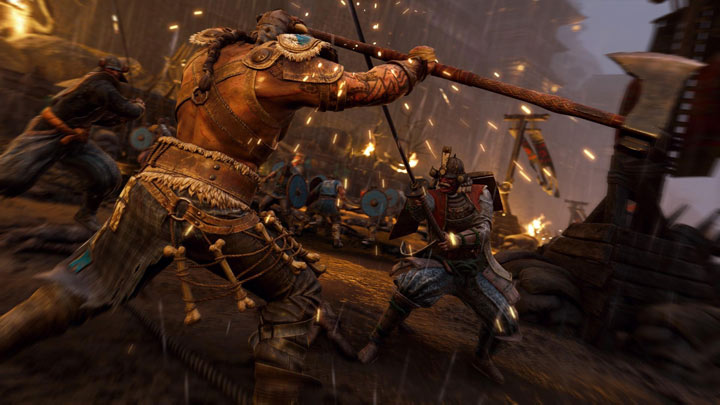 Hopefully that changes for the final release, as it would force players to be wary of friendly blades as well as enemy ones, and it would offer a solo defender fighting multiple attackers a greater chance at success should they hope to kill by flailing. That said, the way that the physics engine works in For Honor means that teammates still have to exercise a degree of cautions around friendly combatants. I was knocked down a flight of stairs when an aggressive teammate charged an enemy, and me, against a wall.

That same teammate later inadvertently killed me when they tried to pick up an enemy player and rush them into a spike trap. The enemy landed safely, and I ended up down in the spiky hole. I’m not saying it’s causality, but we lost that round shortly after. Thanks, guy.

I wasn’t too upset, though, because it’s actually great to know that the game allows for those kind of emergent moments. The kind of moments that make for cheering or berating are the ones that tend to make for memorable multiplayer experiences, and For Honor has the fun factor in spades.

The 1v1 Duel mode is, arguably, even more satisfying than Dominion. While the maps are the same, the fighting areas are restricted to tight spaces within those familiar battlefields, which makes for some intense battles. Positioning plays a big part in victory or defeat. Players can be kicked off cliffs or tossed into fire, and knowing that you have your back against a potential elemental threat makes for nervous defensive manoeuvres.

This is all part of the fun, though, as the more you lock swords with the same player, the more you learn their favoured tactics and come up with different ways to counter them on the fly. In this respect, For Honor’s Duel mode plays out like a deadly game of Texas Hold’em Poker, as both combatants try to outthink and out-bluff each other. It makes victory all the sweeter, and means that even narrow defeats can be celebrated. It doesn’t always play out that way – I had one round that I won without taking a hit – but the fact that it’s a best-of-five system means there’s room for thrilling comeback wins.

When I played For Honor at gamescom last month, I was concerned. One month later and I’m officially counting down to the game’s release on February 14 next year. After you wrap your head around the basics and move beyond flailing, there’s an impressive depth to For Honor’s combat that should make for enticing battles between evenly matched combatants and teams. 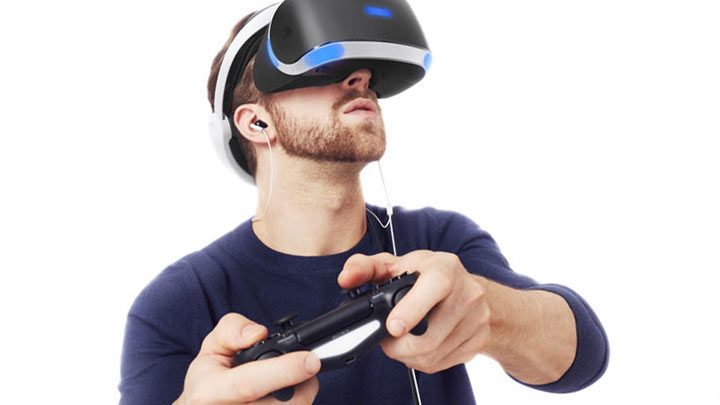 Next →
PlayStation VR and other headsets could lead to serious eye problems, leading surgeon warns
Click here to cancel reply.