Pokemon GO hysteria: 6 facts that will blow your mind

There’s no doubt that Pokemon GO and the hysteria surrounding it will go down in the history books. No app, game, meme or celebrity outburst in the past decade has generated as much engagement and online chatter as Pokemon GO has. It’s completely insane.

Pokemon hysteria is nothing new: we saw it in the 90s and again at the turn of the century, but the obsession was nothing compared to what we’re seeing with Pokemon GO. The most obvious reasons for that are because it utilises smartphones — something billions of people use for hours a day — and that the amplification and spread of information on social media is hyping the app up to insane levels.

So just how popular is Pokemon GO? You won’t believe some of these facts.

It’s been just over seven days since it launched in Australia, New Zealand and the US, and at one point it exceeded Twitter’s 65 million North American users. That’s insane. 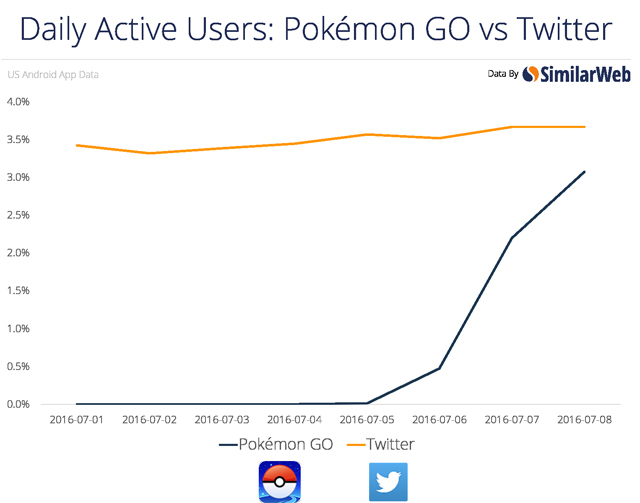 Android users are lapping it up

Pokemon GO has been installed on almost 6% of all Android devices in the US. That’s around 5 million downloads.

It’s more popular than sex (not really, but kind of)

Around 2% of Android devices have Tindr installed (don’t act like you don’t know what Tindr is). Pokemon GO is hovering around 5.6%. That means that one of the most popular smartphone data apps has been trumped by a game in which you walk around catching virtual creatures. Although, the chances of finding someone half-decent playing Pokemon GO is probably higher than on Tindr. 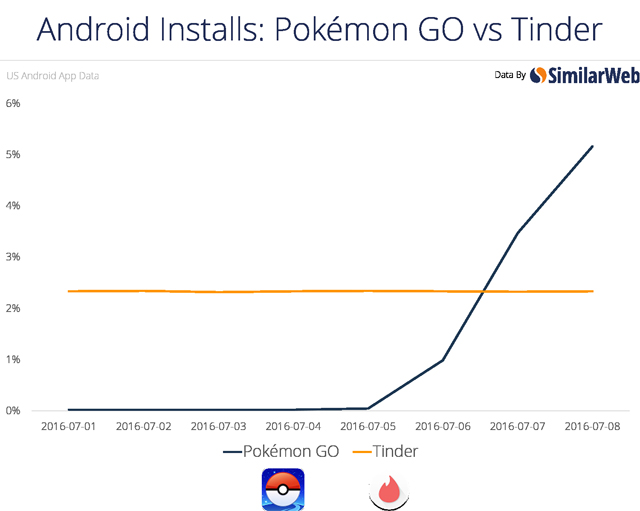 Whatsapp, Instagram, SnapChat, Messenger. None of these apps can compare for usage time with Pokemon GO, which clocks in at around 43 minutes a day for each user. Whatsapp is next with 30 minutes per day, while Messenger is a paltry 12 minutes a day. 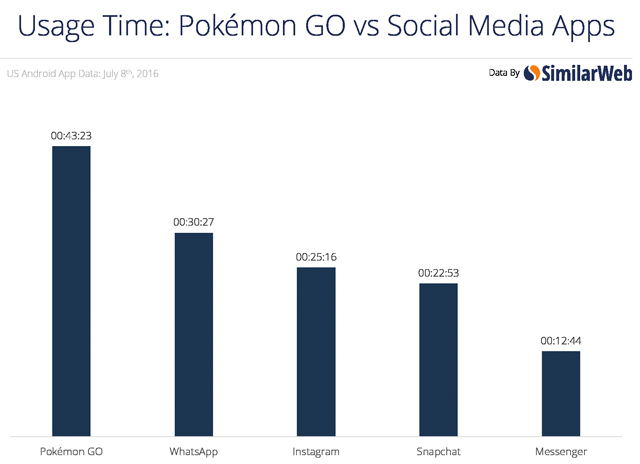 It’s so popular, they’ve had to delay the European launch

Normally when games are delayed, it’s due to licensing, classification, marketing, or perhaps due to technical issues. In Pokemon GO’s case, it launched relatively successfully in four markets, although server issues hit it in the early days. The European launch was expected to happen this week, but it’s been delayed and will launch “in a few days”, with a weekend or early next week launch expected. Basically, the app has been so overwhelmed with users, they’ve had to hold off launching it to another market, which would undoubtedly set off another hype train.

Nintendo had their best day since 1983

Even after the success of the Wii, not to mention Pokemon hysteria in the ’90s, Nintendo’s stock price rise after the launch of Pokemon GO was its biggest daily rise since 1983. The game helped add around US$7.3 billion to Nintendo’s value. However, analysts predict that the app would need to earn around $160 million every month to impact Nintendo’s profits. With the game earning somewhere in the $4.5 million every day since launch, and a European launch still to come, it seems likely that, so long as the game is at the top of the charts, Nintendo is in for more than just a stock jump. It’s worth noting that Nintendo had very little to do with the game: it was developed by Niantic in collaboration with The Pokemon Company, although Nintendo has a share in both companies. The Pokemon Company receives around 30 percent of all the game’s revenue.

Nintendo having their best day since 1983 as #PokemonGo takes over the world#MoverOverMario pic.twitter.com/9XnHeumMSx

So anyone considering buying some Ninty shares?