Red Dead Redemption has finally hit Xbox One via backwards compatibility. If you can’t half tell, I’m having a blast with it: from using cheats to cause havoc in the game’s stunning Wild West setting, to re-experiencing the game’s most memorable moments, I’m glad to be able to finally return to this six-year-old gem.

If you’re still on the fence about purchasing and returning to Rockstar’s classic, here’s why I think you should stop whatever it is that you’re playing and jump back into Red Dead Redemption.

Its barren Wild West setting is brimming with life 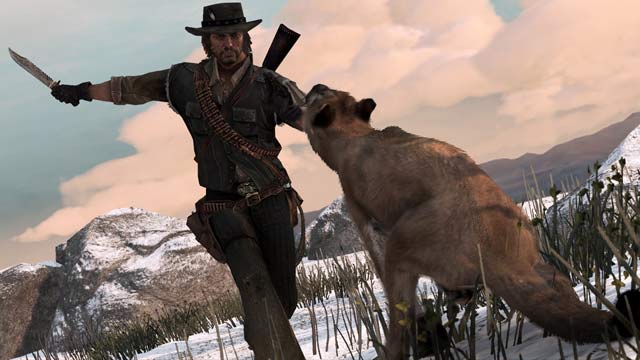 No developer knows how to balance aesthetic beauty with bustling life and action better than Rockstar. When Red Dead Redemption first graced our consoles back in 2010, we’d already played through Assassin’s Creed, and also helped Niko make a name for himself in Liberty City. It was always going to be a challenge for Rockstar to create a game world that lacked the liveliness of a city yet was still appealing and engaging for the player, but the acclaimed developer absolutely nailed it with Red Dead Redemption.

Your journey in Red Dead Redemption is going to take you through a huge open world with a diverse and challenging landscape. You’ll trek through forests, deserts, small towns and campsites, and meet plenty of fascinating characters, not to mention dangerous wild animals.

The world of Red Dead Redemption is deceiving: if it’s too quiet, that generally means danger is right around the corner. That’s what makes the game world so amazing: despite its vast, barren landscape, it’s brimming with life.

Some six years after release, Dead-Eye is still as tight and innovative as ever 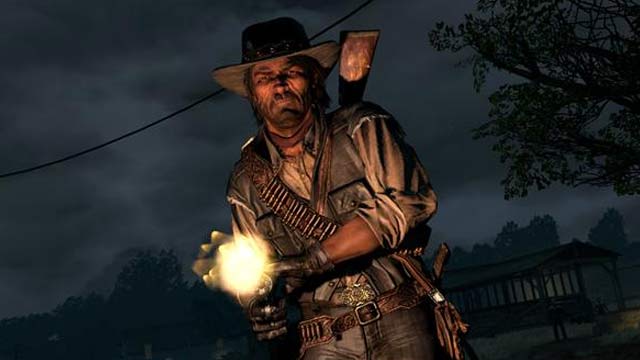 Red Dead Redemption‘s Dead Eye mechanic still works wonderfully today. It allows you to slow down time before tagging and shooting multiple enemies in a deadly burst of bullets. While it’s certainly not “unique” — a number of games had already used a similar mechanic, namely Max Payne and even Redemption‘s predecessor in Red Dead Revolver — it was Marston’s twist on it that established it as one of the finest and most rewarding gameplay mechanics of all time.

Being able to return to it and improve it as the game progresses is as satisfying and enjoyable as it was six years ago.

It tells a story better than most games 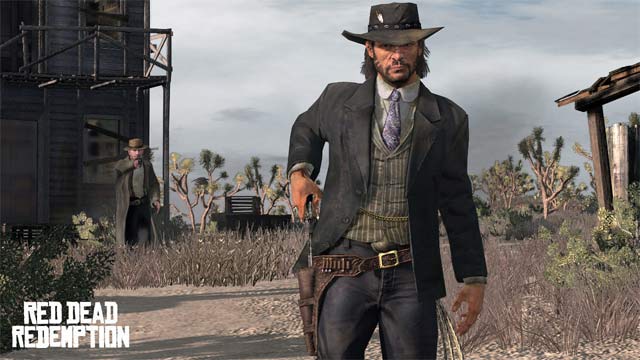 Our anti-hero in John Marston heads out and leaves his old life behind, coming across a number of old foes and friends in the process. His ultimate quest is one that challenges his morality and fatherhood, breaking down an elitist wall of power and corruption that smothers the old West. In typical Rockstar fashion, Red Dead Redemption is drenched in social and political commentary, of course with tongue firmly in cheek.

And without giving anything way, I’ll just say that the ending is one of the more confronting and emotional in video game history. Few games have managed to build such a strong bond between main character and player, and despite his rough-around-the-edges persona and staunch individuality, John Marston is surprisingly relatable. 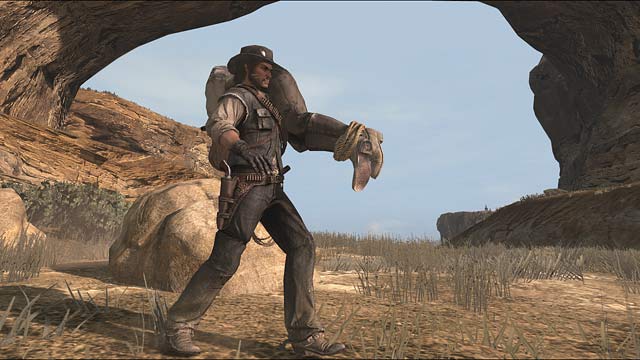 It wouldn’t be a Rockstar game — or open-world game for that matter — without a hoard of side-missions to compliment the main story campaign, and Red Dead Redemption has them in droves. Its “Strangers” side quests gave players multiple options in order to complete, yielding either a positive or negative reaction from the outcome, which in turn helped determine John’s fame and honour. Even chasing down bounties and hogtying bad guys had its charm, as these tasks helped make you feel part of a world struggling with law and order. 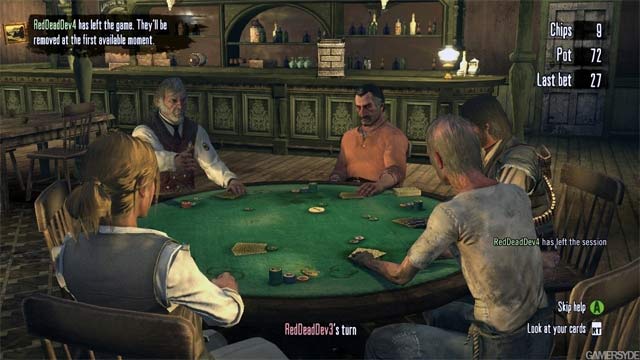 I suspect that Rockstar learned a thing or two about mini-games after Grand Theft Auto IV. Bowling, drinking and darts didn’t really suffice as fun experiences, even if they were contextual, but Red Dead Redemption‘s mini-games perfectly compliment the game world’s identity and grittiness.

Poker, Arm Wrestling, Blackjack, Horseshoe, just to name a few. Sure, they were silly and as with most mini-games generally pointless in the overall scheme of things, but they were appealing in their own strange way, as they just made the world feel more alive and real. Driving and drinking is what we do today, in 2016, but playing Poker with a bunch of unstable drunks outside a saloon in the Wild West? Now that’s crazy!

Just get a load of that scenery: 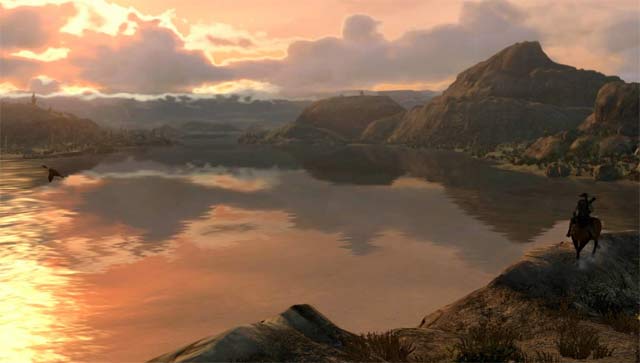 One of the best gameplay elements of Red Dead Redemption was that of the trusty horse. Some six years after release, I’m not sure any game has come close to beating out Red Dead Redemption for realism (yes, that included Metal Gear Solid V: The Phantom Pain). The horses move and react to the environment realistically, and while not brutal in their realism in that they’re as vulnerable as real horses, the game would punish you for overworking your horse, which is yet another feature that really complimented the game’s harsh landscape. Much of the core gameplay was centred around horseback riding, allowing you to steal them, shoot down enemies while on horseback, jump off them and onto moving trains, and even call to one when stranded in the middle of nowhere.

The Red Dead Redemption horse is undoubtedly one of gaming’s best companions. 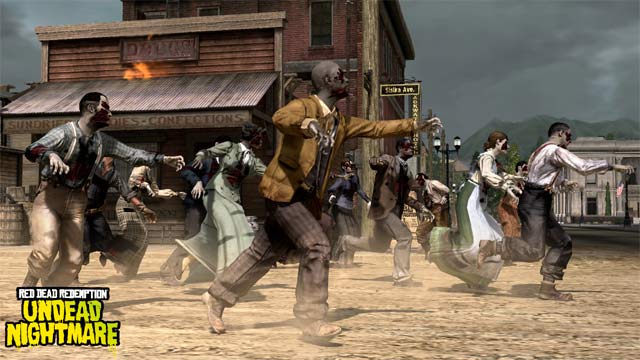 Long before the whole Zombie invasion thing took hold of Hollywood, games, comics and literature, Rockstar was looking to establish itself in the genre with its own unique spin. It had already set an incredibly high standard for DLC with GTA IV, and it certainly met that standard with the fantastic Undead Nightmare. It turned the traditional Red Dead Redemption experience into a quirky, slapstick one, while also managing to balance the harsh realities of the game’s landscape and population. It was released to wide critical acclaim and rightfully so: it’s a fantastic piece of DLC, but also one of the finest open-world zombie games you could play.

Its online multiplayer is surprisingly good 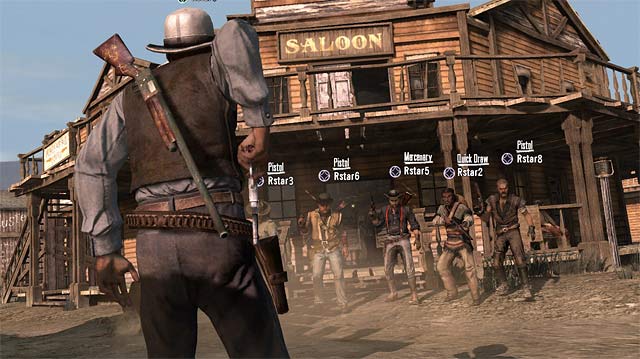 There were a few people playing online when I checked, which is a good thing because I suspect that with the influx of people returning to Red Dead Redemption, you’ll want to hit up multiplayer. If you don’t, I highly recommend that you give it a chance: it’s a surprisingly tight and balanced multiplayer offering, with a number of great modes, maps and weapons available. If you can get some friends together to host a private match, even better. 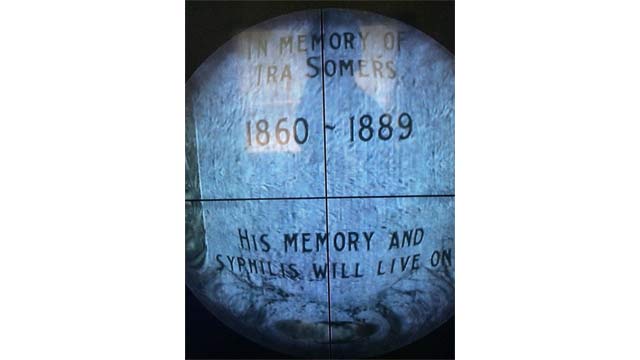 It wouldn’t be a Rockstar game without some cheeky secrets scattered around the game world. Most can be found on tombstones near chapels, but there are a few others to find. Check out the full list (that we know of) here.