It’s been a long time coming, but Blizzard appears intent on feeding into Overwatch‘s other metas across Competitive tiers, hopefully putting an end to the controversial GOATS meta. This seems apparent in the game’s latest PTR update, which the latest patch notes detail impact six heroes across the roster.

Perhaps the most significant of the changes come by way of Baptiste and DVa. With Baptiste, he’s powerful Amplification Matrix has been extended from eight seconds to 10 seconds duration, while his Biotic Launcher healing grenades has an increase mag count, risen to 12 from 10.

What this may see is a more effective and common use of Baptiste as a “combat medic” type hero, one the game desperately needs at a competitive level to help slowly weed out the GOATS meta and reliance on a tank-led team composition.

Conversely, DVa has once again seen her Defense Matrix nerfed, which may actually feed into a return of a dive-like composition, but makes her less viable as a payload leader. Her Matrix now has a range of only 10 metres, reduced from 15 metres, so she’ll need to get more up close and personal to be effective. This means the likes of a Pharah or Soldier ultimate can be far more devastating on both her and her teammates, given they tend to be most effective at range, and can now shred through the effectiveness of the Matrix.

McCree, Orisa, Symmetra and Torbjorn have also seen some minor changes, mostly refinements to key abilities to make them more viable in a post-GOATS meta. McCree in particular has seen somewhat of a mini-buff, with his fire rate seeing a bit of a boost with recovery reduced from 0.5 seconds to 0.4 seconds. That means a full clip can be unloaded almost a second faster, boosting his damage output mildly.

You can read the full list of patch notes on the official Overwatch forums.

← Previous
Call of Duty 2019 will be Modern Warfare, but it's not what you think 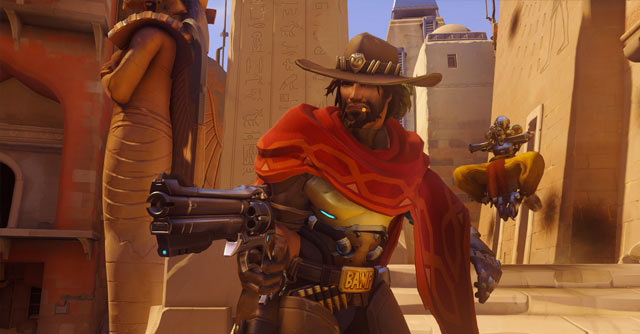