With E3 around the corner, the next month stands as an exciting time for Xbox diehards — and gamers in general — ahead of the unveiling of Xbox Scorpio, which will inevitably happen at the event. The technical elements of the console were revealed last month, but in terms of appearance, software, release date and price, there’s still quite a bit to be revealed.

One interesting tidbit to surface over the past few days has been that of the console’s dev kit, and it’s mighty impressive for a console.

What stands out the most about the console’s sleek design is that it has an LCD screen on the front panel that displays the active running framerate, among other things.

Windows Central’s Jez Corden revealed the video on Twitter, showcasing the counter in action, and ending speculation about the dev kit’s front panel that had been circulating for weeks following the spec unveiling.

The screen can also be adjusted to show the console’s read and write speeds, something the every day gamer probably doesn’t care for, but certainly fits into the Scorpio’s self-proclaimed appeal to the “core” gamer. Of course, we don’t know if said counter will appear on the final retail version, but it would certainly be a big selling point towards that audience.

Interestingly, the video that Corden shared was actually an animated version, but he says he plans to reveal more soon, and to “stay tuned”.

It would be a huge risk for Microsoft to include the counter on the final retail version: doing so would put a lot of pressure on the hardware to constantly perform. If the framerate dips below 60 frames, then you open the door to all sorts of negative coverage and ridicule. 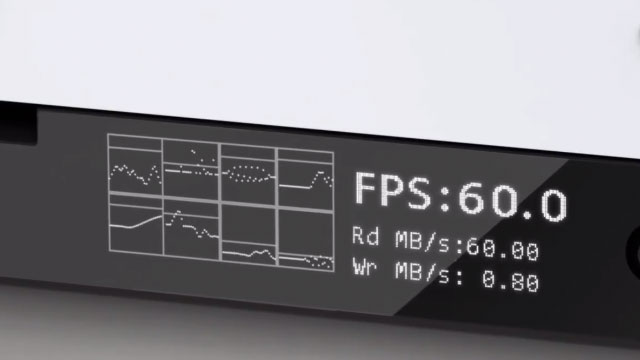 Thanks to the folks over at Digital Foundry, who saw the console first hand and confirmed the stats, we have context behind Microsoft’s bold claim about Scorpio being the most powerful gaming console on the market.

E3 may very well be the first battlefront for Scorpio.