Blizzard’s Overwatch has developed a passionate community across Xbox One, PlayStation 4 and PC, but it could yet have a sleeping fanbase among Nintendo’s faithful.

The release of the Switch last month has raised the prospect of the game coming to the console, with strong launch sales and third-party support pointing to a successful generation for the gaming giant.

Not a week goes by when Blizzard isn’t asked about the prospect of bringing Overwatch to Switch, and while it’s not completely out of the question, the studio seems hesitant to even embrace the possibility.

“I think the problem is,” he said, “we’ve really targeted our min spec in a way that we would have to revisit performance and how to get on that platform.”

There’s also having to support the game across three platforms already, with differing update and approval procedures occasionally making life difficult for the developer.

“It’s already challenging right now maintaining three platforms and patching simultaneously, which is something that we’ve finally been able to achieve,” Kaplan explained.

Throwing the Switch into the mix would make it difficult to patch all platforms at once, something the studio can currently manage across PS4, Xbox One and PC. 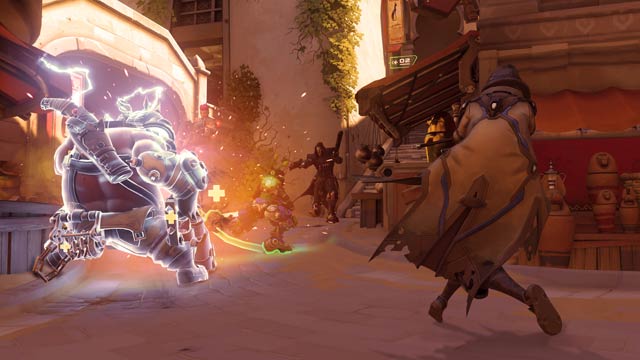 As always, however, Kaplan didn’t straight out dismiss the possibility of Overwatch on Switch.

“Just because we’re not on a platform right now, it doesn’t mean we won’t reconsider it in the future, so we stay aware of all these things,” he said.

These comments come a month after Kaplan took to Reddit to answer questions about the game’s Switch prospects.

Speaking to fans on Reddit, Kaplan was asked whether there were any plans to bring Overwatch to Switch.

It presents an interesting proposition for Blizzard considering the hype around Switch and the potential the hardware has for on-the-go gaming with console-quality software.

Kaplan admits, however, that there would be roadblocks, but not before praising Nintendo and its hardware.

I’m loving the Switch!” Kaplan said. “My second favourite gaming platform of all time is the 3DS!”.

He may have just been saving face, though (although we doubt it): he then went on to say how difficult it would be to bring Overwatch to Switch.

“Getting [Overwatch] on the Switch is very challenging for us. But we’re always open minded about exploring possible platforms.”

There could be a number of potential problems holding Blizzard back in this regard.

Firstly, Nintendo doesn’t plan to launch its paid online service until later in 2017, and until then, the entire feature seems to be going through beta stages, even after launch.

Secondly, the hardware itself may not be able to run the game, even with Overwatch‘s surprisingly low-tier specs requirements. The Switch hardware may just not be cut out for the type of game Overwatch is.

At this stage it could just be a matter of waiting to see how well the Switch sells over time.

What do you think? Can Overwatch work well on Switch? Does it belong on the platform? Sound off in the comments below!

Next →
The 5 things that will guarantee Xbox Scorpio is a success
Click here to cancel reply.