The nature of For Honor is one of conflict and bloody battles. That’s a given for a multiplayer game, but the sheer diversity of the character roster, differences between the factions, and randomness of the battles themselves makes it actually one of the more challenging multiplayer games out there.

In For Honor, there are three different factions, each with their own approach to war, combat and progression. While the classes are the same across each faction, the general design and balance of each faction creates a subtle element of differentiation, so there’s a lot more to it than simply selecting the faction that has the best colours or more gruesome-looking characters. There’s actually depth to each faction, and how they differ between one another in the midst of battle.

The three different factions in For Honor are the Vikings; the Samurai; and the Knights. Let’s take a look at each, and try to determine which faction is best for you when starting For Honor for the first time.

The Vikings are For Honor‘s brute force: the faction you don’t want to mess with alone because they’ll knock you straight to Kingdom Come!

As with the other two factions, there’s actually good balance here between a specific stance and strategy and defensive capabilities, but mostly, Vikings are heavy hitters. 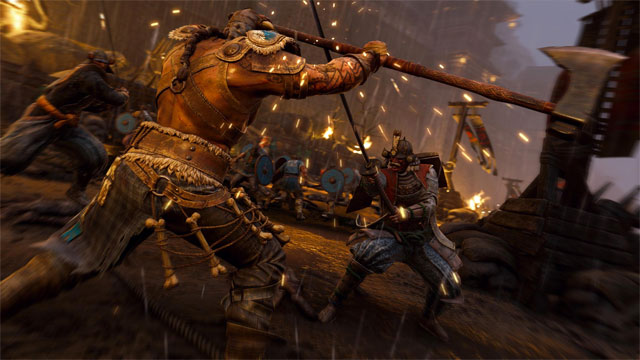 They deliver the hardest hits by far, and so can be used to rush and surprise opponents. The ability to bang and crash into an enemy camp with such effectiveness makes the Vikings a useful faction if you’re looking for dumb and fun action.

The problem, however, is that they lack much in the way of defence: the Vikings philosophy is to take out the enemy before they have a chance to even respond, so there’s little thought put into defensive strategy. The Raider, for example, deals insane damage with his axe, and while he’s still tough to take down due to sheer size, he lacks much in the way of strong armour. Simply put, you want to rush in, attack, destroy, pillage, and then get out as soon as you went in. 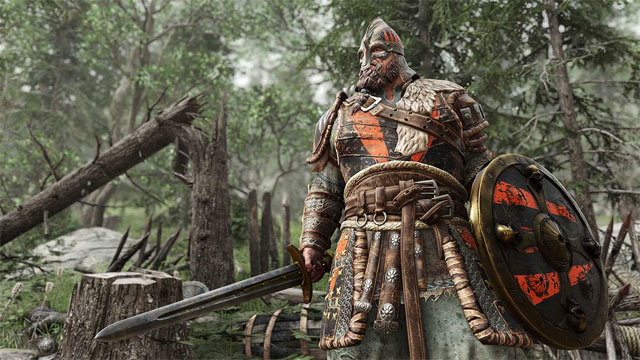 The key for playing in the Vikings faction is to attack hard, fast, and by surprise: once the enemy has broken out into defence stance, Vikings have the upper hand. At no point are they prepared to defend themselves.

There is a defensive class by way of the Warlord, which is actually kind of a Knight-Viking hybrid, making for an interesting balancing act on the battlefield. Should Vikings and Knights come up against one another, Knights need to find a balance between attack and defence, because they can’t afford to be pushed back by the Vikings rush, nor can they afford to not attack or be dominated by the Warlord and his men.

Are The Vikings For Me?

The Vikings aren’t a particularly tough faction to play as. It’s just that overall they lack much in the way of defence, so if your team were to lack coherent structure, you could face a lot of defeats initially. The Warlord acts as a good defender of the people, but he’s really all there is.

If you feel you have a good grasp of the game’s combat mechanics, and love the crash and bash nature of the Vikings, they are definitely for you: just don’t stop on the attack, and if at any point the battle turns against you, retreat! It’s pointless trying to defend with any class other than the Warlord.

The Knights will probably end up being the most popular faction in the game. That’s because as it currently stands, they’re the easiest, most accessible, and most well-rounded faction in For Honor.

Of the Knights heroes that have been revealed so far, the Knights faction is predominately defence focused, allowing newcomers to easily transition into the game with generally strong armour, and a tendency to last for longer periods in battle. 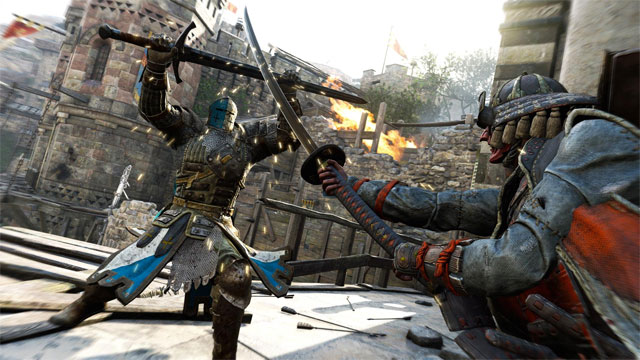 The compromise in that regard is that there’s no real standout in terms of attack; The Wardens are probably the most balanced across defence and attack; The Conquerer is specifically designed to be walking barracks to defend other Knights; The Peacekeepers are quick but vulnerable; while The Lawbringer, while powerful, is slow and heavy.

When functioning as a team, however, the Knights posses easily the best balance of all the factions. 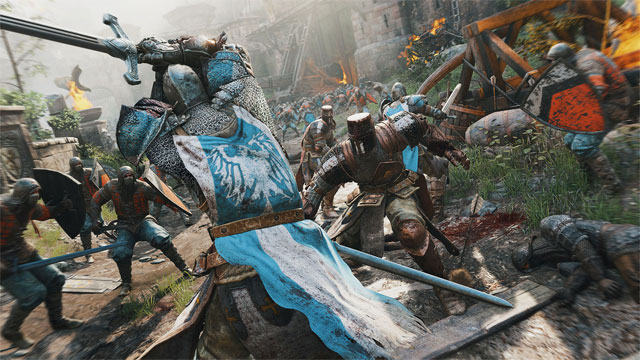 What makes the Knights faction so easy to play as is the balance between defence stance with shields — aside from The Peacekeepers — alongside straight-forward combat. There’s nothing overly complex about how this faction works.

Are The Knights For Me?

If you want to be on the safe side, the Knights are certainly the easiest faction to side with. All classes aside from The Peacemaker are easy to play as, and there’s a nice balance between staunch defensive strategy, and basic but efficient combat manoeuvres.

The Peacekeeper actually offers a good challenge, so if you’re a little more experienced coming out of the beta and think you can deal with the decreased defensive awareness, the class can be a particularly useful infiltrator for a faction that is otherwise slow and simple in attack.

The Samurai are essentially a more refined and complex variation of the Knights class, and as such they act as a fine counterbalance between the Knights and Vikings.

As a faction they stand out and excel in long-range combat, which, if managed well, can allow them to plan balanced attacks from multiple angles and radiuses. Perhaps most appealing about this faction is that they have a really fine balance between long-range, close-range, brute force, and defence, ensuring they offer the absolute best of the other two factions. 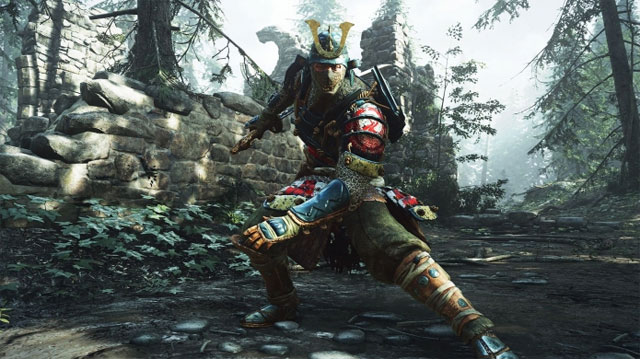 This comes at the expense of accessibility, however, so you need to know your stuff if you’re really going to get the most out of these guys. They can rush and surprise an enemy like Vikings, or move in slowly and flank like Knights. Alternatively, they can lure the enemy in close and then rush forward with the element of surprise: there’s certainly more in the way of tactical approach when it comes to the Samurai.

The Orochi class is perhaps the toughest to play as in For Honor due to its speed, but it has superb defensive and blocking capabilities. Both the Kensei and Shugoki are actually on the slower side relative to the Orochi, but they would beat the heaviest of the Knights and the Vikings in a foot race, hands down. 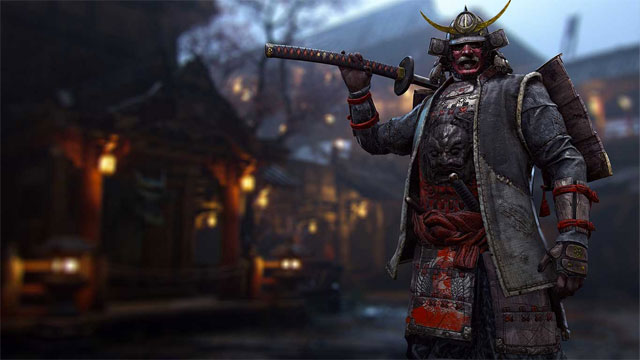 Are The Samurai For Me?

The big challenge in deciding whether to side with the Samurai is determining whether or not their weapons are at all appealing to your play style. That’s because there’s such an intimidating number of options available to you. The Kensei has blades that can take out enemies at a mid-range distance, while the Orochi has a bow and arrow. The other two classes are close-range heavy hitters, and so as you can see, the Samurai have the most diversity on the weapons front.

It’s a hard class to gauge, but it does appear to be the most rewarding and satisfying if you can pull off a good class structure. It’s a big risk going with them, and expect them to be in small numbers, player wise, but there’s plenty to like about this class. If you have the patience and willingness to move between the classes and learn what makes the Samurai tick — and if you have an inkling for long-range combat — then the Samurai are definitely for you.

White text on white background. I can't comment on this. Fix your shit page. Seriously this is hell. I have to guess that I'm writing correct here.