Nioh doesn’t hide from the fact that it hates you and really doesn’t want you to succeed. It shows this love by throwing some of the most gruesome and tough enemies around at you, and making sure you have little — if any — chance of beating them.

When that little chance exists, all you need is a little push in the right direction, and that’s where this guide comes in!

Specifically, we’ll be talking about the Umi-bozu boss, which is the eighth boss in Nioh, and happens around mission level 38.

Now this sucker can be exceptionally tough to bring down, mainly because he invites in some of his devilish little minions to help him out. He’ll call in these little fellows to help him out in battle, which is bad news for you because you’ve already got your hands full with the main boss.

Thankfully, there’s a way to get around this, but it involves a little pre-boss exploration. It’s simple in theory, although rather timely in execution. That said, it will make the battle all the more easier for you, so you can progress without that added stress.

In order to get rid of the minions, you need to light three bonfires, which are — thankfully — located close to where the Umi-bozu battle actually takes place.

You’ll need to light these fires in “The Ocean Roars Again” mission, and doing so will also unlock the “Keep Of The Flame” trophy for your troubles.

First up, look for an NPC near the bridge. They should be standing to the left of the bridge, near a glowing yellow ornament. If they aren’t there, leave the area and return. They will gift you Flint, which is what you’ll need to start fires: without it, this whole little trick is useless!

Find all the bonfires!

Bonfire 1: From where you meet the NPC, head down the bridge. There may be some enemies in this area. When you get to the end of the bridge, there is a central pool area: walk around it to find the bonfire on the opposite side. It’s essentially right near the exit of the bridge, but due to the location you need to walk around the little gap in the bridge to reach it.

Bonfire 2: Next, continue down the path (as if you didn’t backtrack to reach the first bonfire). Shortly, you’ll reach a fork in the path: go to the right. It’ll be a very flimsy path across the water, in some cases only one wooden plank acting as your protection from the water. Keeping heading through, past a few enemies, until you reach a large, brown, wooden door. Head through, and look for the outer area of a sunken ship. Follow the path around, past a few enemies, across some more wooden planks, up the ladder to the roof of a house. Follow the roof around until you reach a hole in it. Drop down to find the second bonfires.

Bonfire 3: Head back up the ladder you did for the second bonfire, around the roof, and walk across the plank rather than drop back down into the hole. Walk across the roofing, all the way to a wooden structure and dead end. Drop down to the right, then head left, left again, into a room with a boarded up door. Take out the enemies in this area — there’s one super tough dude wielding an axe, just dodge and attack, but be careful because he’s quick! — and then once he’s dead, look for the final bonfire in the room.

Once you’ve lit all three bonfires, you can tackle the Umi-bozu boss battle and not worry about those creepy, annoying minions attacking you while you battle him. 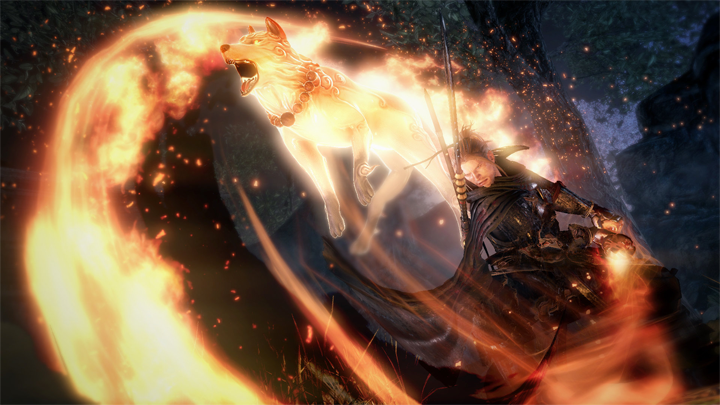