The new “Deadline” Adversary mode introduces the Nagasaki Shotaro, which is, as many will probably notice, an obvious oder to the bikes from Tron.

Everything about it screams the movie (let’s forget its sequel ever happened): the light cycles, the neon trail, and pretty much everything else about the bike’s design screams, “TRON“.

You can unlock the Shotaro by playing Deadline for the first time, although you’ll need to spend some real cash on it. You’ll also earn an in-game Nagasaki logo t-shirt for your troubles.

So what is Deadline? It’s a 4-player arena deathmatch mode, in which each participant rides on a coloured Shotaro. The primary objective is to lure other riders into your light trail, causing an instant kill. 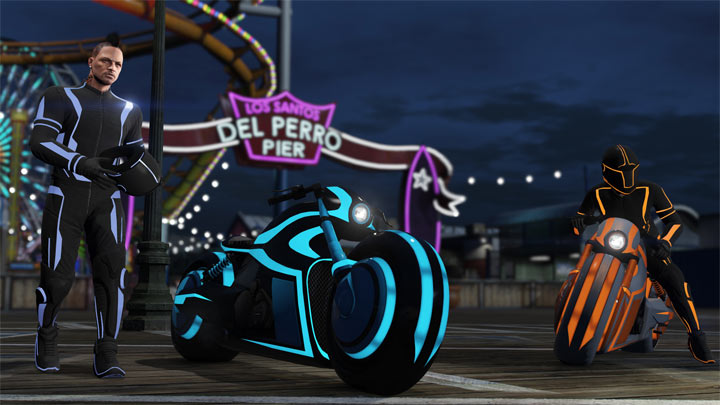 There are three power-ups available in the mode, and Deadline players will earn double the money and RP for taking part in it, right up until November 21.

Also being added to the mix is a new Premium Race, “Over The Bridge”. It pits bikes against one another across the freeways of Los Santos, with all participants earning triple (!) RP.

The update is available now.

← Previous
Overwatch console players miss out on the PTR, but why?