The reveal of Forza Motorsport 3 during yesterday’s Xbox E3 2016 press conference was undoubtedly one of the highlights of the show.

Set in Australia, the game looks to be the best virtual recreation yet of our great southern land. Just have a gander at some of the locations in the game and tell me you’re not deadset stoked for this true blue Aussie game.

Once you let the awesomeness of a racing game in Australia set in, sit back and take in the monstrosity that is the game’s map. It should have those of you with even a modest understanding of geography cringing (thanks to the fully sick c**** at Stevivor for sourcing the map). 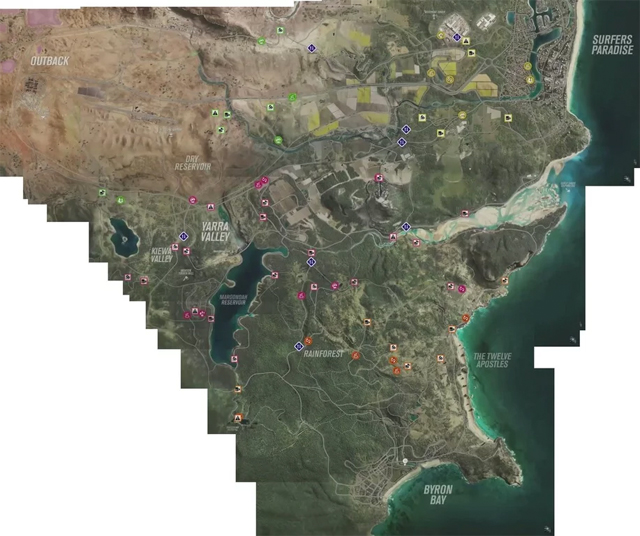 So what we know is that alongside what we saw in the trailer, we’ll also be able to drive through Surfers Paradise and Byron Bay. The problem, however, is the geography of it all.

The Outback and Surfers Paradise are actually perfectly situated. The three other prime locations — the Twelve Apostles, Byron Bay and the Yarra Valley — are shockingly out of place. You might wonder why this matters all that much, but please consider that Australia is incredibly large and diverse, and with that comes diverse weather conditions. The fact The Twelve Apostles is closer to Surfers Paradise than Byron Bay, despite actually sitting to the south of both cities, makes little sense. The Twelve Apostles is located in the south-west surf coast of Victoria, with the Yarra Valley located to the north-east. Byron Bay and Surfers Paradise are to the far north-east of both of these locations, both heading towards tropical far north Queensland. The Twelve Apostles are about as far away from “tropical” as you could get. In fact, it’s closer to Antarctic than tropical. The Yarra Valley is also a short drive from Melbourne, which is far down south from Byron Bay, yet it’s north-west on this map. This map’s a dingo’s breakfast, mate!

My goodness, I’m having a brain haemorrhage just thinking about it. 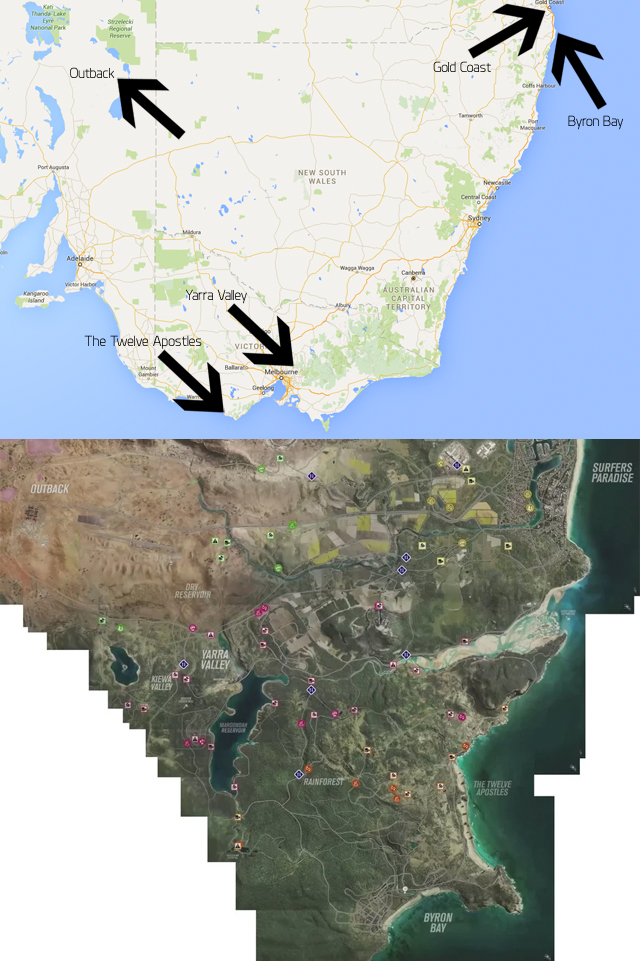 Now I understand that for the sake of design and condensing the map they needed to mess around with the geography, and I’m guessing they didn’t want us to just be driving over the land where Melbourne and Sydney would normally be. But still, even better locations that suit their geographical placement would have made more sense. The thought of The Twelve Apostles being north of Byron Bay is seriously something I’m going to lose sleep over. It just feels…wrong. It would be like having Chicago sitting north of Los Angeles on the west coast of the US, facing out to the Pacific Ocean. That would cause havoc among the community. It’s outrageous to even contemplate that.

Anyway, I’m sure I’ll come to love the map because, well, it’s a map for a racing game set in Australia. Also, the game looks awesome, and the map itself is huge. I’ll still give it a burl, because the trailer was grouse and I’m pretty pumped.

But is the map all sorts of dodgy? Bloody oath!

Struth! The flamin' galahs at Turn 10 must feel like right drongos

AND WHERE ARE ALL THE PUBS?